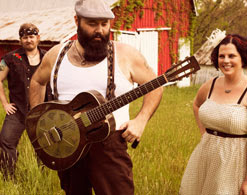 Hello programming friends, it’s Andy Gesner and the crew from HIP Video Promo bringing you another must-watch video from our friends at SideOneDummy Records! From the new album Between the Ditches, we are pleased to introduce the outlandishly entertaining video for Reverend Peyton’s Big Damn Band’s “Devils Look Like Angels.” The raw, gritty, and raspy vocals and raunchy southern sounds entertain the certain ideas that have been crafted by these talented musicians to inspire and thrill music listeners across the nation.

The dazzling sounds of Reverend Peyton transcend adult contemporary blues by adding subtle elemental features of classy blues riffs. The band is a three-piece American country-blues band straight out of Brown County, Indiana. They previously released eight albums, and their current album Between the Ditches has been placed on number two on the Billboard Blues Chart. SideOneDummy Records has captured a band that offers catapulting themes of societal norms in their gritty songs. This sound has taken Reverend Peyton’s Big Damn Band across the world, touring with contemporary artists such as Flogging Molly, Hot Buttered Rum, and The Derek Trucks Band; they have even gained the likes of music listeners internationally in countries such as Italy and Switzerland. We’ve brought you “Mama’s Fried Potatoes” and “Clap Your Hands,” and from their newest released album Between the Ditches, we bring you the profoundly entertaining “Devils Look Like Angels.”

The beginning of the video presents us with the band performing in a lonesome looking town, and a little girl appears, mouthing the lyrics of the band’s gritty sounding front man, Reverend J. Peyton. “Devils Look Like Angels” offer a unique blend of ideas revolving around the knowledgeable advisement that nothing is ever what it seems. The young girl in the video is seen getting tattoos, stealing money from a homeless man and even the band! Her presence emanates powerful statements involving questions pertaining to truth and the difference between right and wrong. The entertaining actions of this little girl will surprise you, even somewhat overwhelm you, but they will make you laugh. The electrifying notion of whether or not to trust something that seems angelic but may be devilish inside is seen through the wise perspective of this little girl. “Devils Look Like Angels” profoundly organizes the thoughts of the daily mind through moving lyrics and taunting images. Click HERE for the full bio!