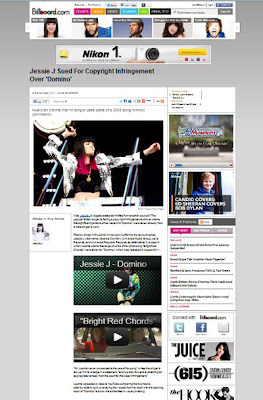 Was Jessie J’s biggest stateside hit lifted from another source? The popular British singer is facing a copyright infringement suit over claims that significant portions of her recent hit “Domino” were taken directly from a male singer’s work.
Filed by singer Will Loomis in Newport, California, the lawsuit names Jessie J (real name: Jessica Cornish), Universal Music Group, Lava Records, and Universal Republic Records as defendants in a case in which Loomis claims that large chunks of his 2008 song “Bright Red Chords” were taken for “Domino,” which was released in August 2011.
“Mr. Loomis never consented to the use of his song,” writes the singer’s lawyer Chris Arledge in a statement, “and we look forward to obtaining an appropriate remedy from the court for this clear infringement.”
“Domino” spent 24 weeks on the Hot 100, peaking at No. 6. Jessie J’s debut album, “Who You Are,” peaked at No. 11 on the Billboard 200 upon its release last year.
Click HERE for the full story!