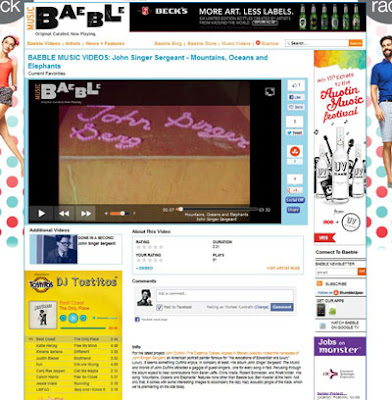 Hello friends, it’s the HIP Video Promo crew here, proud to reveal this enthralling video by the ever talented artist known as John Singer Sergeant. John Dufilho has been writing music since the year 2000—in fact, eight albums worth of it! On his first full-length album since 2008 to be released under his new name, John Singer Sergeant, this creative and edgy collection of songs takes on a serious collaborative effort. With tracks that include backing music that Sergeant recorded entirely by himself, he invited a cast of well-known musicians to appear on this work of art. Artists such as Ben Kweller, The Apples in Stereo Robert Schneider, Centro-matic’s Will Johnson, Rhett Miller of the Old 97s, Kool and the Gang’s Sir Earl Tool, HIP favorite and lablemate Sarah Jaffe, and Death Cab for Cutie’s Chris Walla.

“Mountains, Oceans, and Elephants” features the welcoming vocals of Ben Kweller, and the video is absolutely compelling. The analysis of a large birthday cake echoes familiar family memories that have been created throughout the years. The burning of still wrapped presents, uneaten candy on the ground, and deflated balloons represent the distance between family members and other relationships centered around the very feelings of love as people grow older. However, “Mountains, Oceans, and Elephants” seems cryptic and hard-hearted, but the captivating vocals of Ben Kweller and the ever-so calming sounds that Dufilho creates leave you breathless, yet somehow relieved.