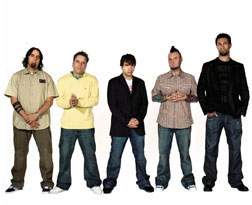 Growing up in the small Pennsylvanian town of Trappe, Jimmy Franks was a typical teenager with a fascination for Howard Stern-styled humor as strong as his love for playing music. In the late 80s, Franks started going by the stage name Jimmy Pop and started Bang Chamber 8, a Depeche Mode-inspired group that put out one cassette demo and broke up within a year. Realizing he didn’t want to fit into the new wave poise and seriousness that bands such as Depeche Mode radiated, Pop tapped into his deeply offensive sense of humor and formed The Bloodhound Gang, a rap-punk hybrid band that would do or say anything to make people laugh or equally offend them.

“Foxtrot Uniform Charlie Kilo” was the leading single off of the Bloodhound Gang’s fourth album Hefty Fine, which is almost universally known for being the album with the large naked man on the cover. Before the release of Hefty Fine, One Fierce Beer Coaster (their sophomore album) proved to be the band’s big break, attracting the attention of label giant Geffen Records. After signing with Geffen, Jimmy Pop and his musical jokesters got together and recorded their 1999 release, Hooray For Boobies, which catapulted them into mainstream stardom with the help of “The Bad Touch.” Proving to be one of Pop and company’s most iconic hits, “The Bad Touch” is a track that taps into the band’s fascination with Eurodance electronics, but still follows the same formula of pop culture references and potty humor that a more alternative rock-based song like “Foxtrot Uniform” follows.

The music video to “Foxtrot Uniform Charlie Kilo” truly is a testament to the band’s total disregard for decency and maturity. Starring MTV’s Jackass star Bam Margera, the video follows the daredevil skateboarder as he drives around in a car altered to look like a gigantic banana. While driving this station wagon, Margera catches the attention of bikini-clad supermodels who are donning hard helmets and using power tools in a way that’s full of innuendo. If that isn’t enough, Margera ultimately passes through the tunnel where the Bloodhound Gang is playing for one final penetration joke (among many, many others).

After the release of Hefty Fine in 2005, it took the Bloodhound Gang a solid 10 years to come together to release Hard-Off, their latest album. In those 10 years, the band in no way went on hiatus and rather continued to tour internationally and get in trouble for their actions as they usually do. A notably infamous moment in the band’s career was when bass guitarist Evil Jared Hasselhoff stuffed the Russian Federation flag down his pants during a show in Odessa. Following this onstage antic, the band was bombarded with tomatoes and eggs at the Moscow airport and banned from playing an upcoming music festival in Kubana by the Russian government. Hard-Off was the band’s first album to be released by the Jimmy Franks Recording Company label (owned by lead singer Jimmy Pop) and features guest vocals by NSYNC member Joey Fatone. The Bloodhound Gang still holds onto the gross humor that they are known for in this album and have not compromised their sound in any way, shape or form. Though the band haven’t been active in a few years, Jimmy Pop and his band of crude musicians revel in their reputation as the most offensive band to come out of the 90’s.

We’ve been big fans of Bloodhound Gang’s unique sound and aesthetic from the start, and we sure hope he’s got more to come soon! We can’t wait to see what budding artist becomes the next break-out star. Do you think your video has what it takes to be the next worldwide smash hit? Get in touch with Andy Gesner and the rest of the HIP Video Promo team by giving us a call at (732)-613-1779 or emailing us at info@HIPVideoPromo.com.