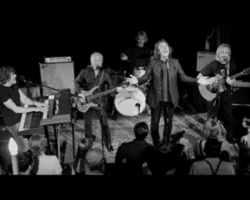 There’s nothing like the magic of a group that have been rocking together for many years; though they went on hiatus for several years in the interim, officially reuniting in 2004, The Zombies have been a band since the early 1960s. The St Albans, England natives first hit Number One in the US with “She’s Not There” in 1964; they also achieved success with their singles “Tell Her No” and “Time of the Season”. The Zombies make the kind of music that feels timeless, yet still honors the traditions of the sounds they created many years ago.

In 2013, we worked with The Zombies to promote their video for “Any Other Way”, which combined influences from both past and present.  That fall we met up with vocalist Colin Blunstone and keyboard player/vocalist Rod Argent to film this HIP Spotlight! In the clip, they talked about the excitement around their reunion, Rod’s process as a producer, and the fun they had shooting the video. Check it out below!

While you’re at it, check out the unforgettable “Any Other Way” video here.

The Zombies have continued to release both new music (Still Got That Hunger, 2015) and a compilation (Time Of The Season, 2017).  Bassist Jim Rodford passed away after a fall in 2018 and the band currently consists of Rod Argent (keyboards, backing and lead vocals), Colin Blunstone (lead and backing vocals), Steve Rodford (drums/percussion), Tom Kooney (guitars, backing vocals), and Søren Koch (bass guitar, backing vocals). They were inducted into the Rock and Roll Hall of Fame in 2019 and still tour whenever they can, so check out www.TheZombiesMusic.com to see what they’re up to.