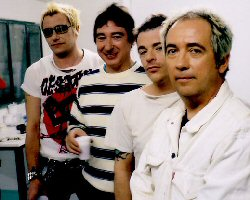 Although they originally disbanded in 1981, Buzzcocks have reformed several times since to perform and release albums. And in March 2006, they released Flat-Pack Philosophy on Cooking Vinyl. Flat-Rack Philosophy was proof of why surviving and remaining relevant is more punk than burning out, and “Wish I Never Loved You” encapsulates the feeling of trying your hardest not to remember the person you just can’t seem to forget.

The “Wish I Never Loved You” video is a choppy collage of hockey players, words on a pager, and live shots of the band. It’s defiant, it’s sexy, and it’s sure as hell punk.

In 2016, Buzzcocks celebrated a milestone that few artists reach- forty years of being a band- with the Buzzcocks 40 Tour. All of us here at HIP were saddened to here that Pete Shelley passed away on December 6, 2018, though the band does live on. In June 2019, they performed as a tribute to Shelley, which featured many guest vocalists to honor him.

Earlier this year, they released the new single “Gotta Get Better”, which proved to be a much-needed pick-me-up for many people!