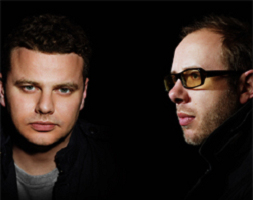 When it comes to the music of the ’90s, everyone readily remembers the monumental influence that Kurt Cobain-esque grunge had on the rock scene. But when it comes to who ruled the dancefloor and clubs, it’s clear as day that big beat was undoubtedly king. This famed EDM style combined the synthesized looping of techno with fierce, distorted basslines that shook buildings as they played. It perfectly harmonized the sounds of breakbeat and electronica into one art form that revolutionized not only electronic music, but the whole music scene of the decade. Big beat truly lived up to the “big” in its name, and no one had more of a hand in making sure that the genre was enormous than the Chemical Brothers.

The Chemical Brothers are the brainchild of Tom Rowlands and Ed Simons, two childhood friends who bonded over a mutual love for the gothic sounds of the UK and the revolutionary hip hop phenomenon that was coming out of the Bronx. In 1989, the musical Mecca for these two teens was none other than Manchester, a city that had a burgeoning club scene thanks to the dance music stylings of local legends New Order and the overwhelming influence of the exclusive dancefloor hub known as the Hacienda. Inspired by the rich musical culture that surrounded them in the city, Rowlands and Simons banded together to create their own take on dance music that would get people moving and shoot them to the top of the charts. In 1997, they would reach the climax of their efforts with the release of their second album Dig Your Own Hole, a musical attempt that would peak at number one in the UK charts and popularize the big beat sound that the duo had been cultivating for many years. Since then, The Chemical Brothers have been regarded as well-renowned heavyweights in the world of electronic dance music.

The “Do It Again” music video depicts a story of discovery and youthful rebellion. We follow two brothers in a Moroccan village who come across a cassette tape that has fallen from the sky. With bewildered curiosity, they put the tape in a boombox and are soon exposed to the infectious and magical rhythms that lie within it. Everywhere they go and no matter who they are with, the brothers’ boombox causes everyone to dance along to the beat in an almost hypnotic trance. With this power in their hands, the two boys swiftly take advantage of the tape by hitching a ride to a nearby city and robbing a bank full of people captivated by the music. Their act of defiance is an attempt to break away from the turmoil in their day-to-day life and bond them in a brotherhood that goes beyond blood. Their journey shows the resiliency of youth and the promise that it has in changing the future and the world around us. The best part is that it’s all done to the sounds of The Chemical Brothers.

It’s an honor to have worked with a group as highly regarded as The Chemical Brothers. As of recently, they have released their ninth album No Geography to critical acclaim, with NME calling it “another leap forward” for the duo. In the summer of 2020, they will embark on a global tour of festivals where they will most definitely get everyone dancing and feeling the vibe of their music. We wish the best of luck for Rowlands and Simons in the new year and hope that they get the party started at every one of their shows.