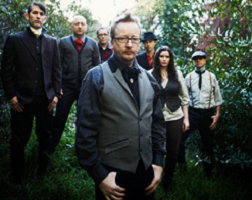 After 20 solid years of promoting music videos, many of our videos have skyrocketed to the top. Today, we present you with one of our most-watched videos on our Youtube channel. Hailing from Dublin, famed Celtic punk band Flogging Molly continues our series with “Punch Drunk Grinning Soul,” released in February of 2010, gaining over 40K views to date.

Arguably one of the most recognizable names in the genre of Celtic rock music, Flogging Molly has released six albums to critical acclaim, always noted for their raw intensity and dedication to Irish folk. Highly regarded is their fourth album Float, which debuted at number four on the Billboard 200 and is known for tackling harsh political themes. Flogging Molly is renowned for attacking their listeners with a powerful message and doing so in a manner that is true to their punk rock roots.

Debuting off of the Float album in 2010, “Punch Drunk Grinning Soul” is a track that is all about putting up a fight. Showcased alongside the band playing their song is a CGI rabbit venturing down a dark and twisted cavern. The small creature is bruised and cut up, but nevertheless, he persists down the hole like he has a mission to accomplish, overcoming nearly all obstacles that stand in the way. This rabbit’s endurance and brute strength are matched only by the intensity of the band’s performance, with Dave King’s shouting vocals echoing in the ears of listeners and fans alike. Flogging Molly makes no exception in making sure this video captures the essence of Irish struggle and fortitude.