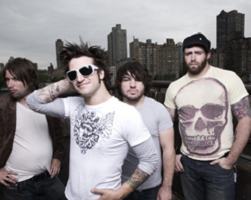 What comes to mind when you think of the city of Buffalo, New York? “Intense” might not be the first thing the comes to mind – but Buffalo natives Every Time I Die are the full embodiment of the word. Combining influences from hardcore, screamo, metal, alternative metal / metalcore, and southern Rock, ETID’s music is chaotic yet poetic, and entirely full of grit and [??]. In 2006, we had the pleasure of teaming up with the band, as well as the crew at Ferret Music, to promote the video for “The New Black”, from their 2005 album Gutter Phenomenon. Directed by Dan Rush, this clip could be right out of the eighties, styled like a period television show. The action takes place at a suburban living room party, where frontman Keith Buckley (who plays the resident, uproarious, ingénue) confronts his out-of-control bandmates, party girls, and even a record label bigshot, who – upon seeing Keith’s moves- rips up the band’s contract as the party empties out of the house. Keith is left alone with a geeky male admirer; ever generous, he shrugs and smiles.

You might think a band as “full-throttle” as Every Time I Die would run out of steam, but if anything, they’ve now got more energy than ever. In doubt about that? Take a listen to their eighth studio album Low Teens, released on Epitaph Records in September 2016. Low Teens peaked at Number 23 on the US Billboard Top 200 and Number 2 on the US Independent Albums Chart. Road dogs from the get go, they’ve toured with everyone from Jackass star Steve-O to Dillinger Escape Plan to Atreyu to Taking Back Sunday. ETID are festival regulars too: the band has performed at OzzFest, Carolina Rebellion, and Rock on the Range, and they’ve also spent seven summers on the Vans Warped Tour (they’ll return to punk rock summer camp for an eighth time for the tour’s final cross-country trek this summer). Head to their website for a list of upcoming shows!

We’ve been big fans of Every Time I Die from the start, and we’re thrilled to see what they do next! We can’t wait to see who becomes the next break-out artist. Do you think your video has what it takes to be the next break-out smash hit? Get in touch with Andy Gesner and the rest of the HIP Video Promo team by giving us a call at (732)-613-1779 or emailing us at info@HIPVideoPromo.com.