HIP can help you with your 2023 music release strategy! 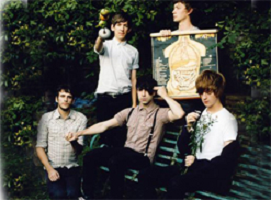 Here at HIP Video Promo, we’ve been working hard to promote music videos since the year 2000. It’s important to us to help younger and independent artists get the recognition they deserve, and it’s exciting to be on the ground floor with artists that become household names (and with over 4500 videos under our belts in 23 years, there are quite a few). Every Friday, we’ll be sharing a “Flashback Friday” video, where we get to reflect on one of our favorite videos from a few years ago.

Formed in Oxford, England in 2005, Foals signed to their first label, Transgressive Records, in 2007. When it came time to release their debut album Antidotes the next year, they teamed up with legendary label Sub Pop for its US release.

What better tool to promote an album than a music video that shows just how much energy the band has? Up first in February 2008, not long before Antidotes was released, we teamed up with Foals to share the music video for “Balloons”, which features dancing – and lots of it! – from the band members and a chorus line of women in 1920s-flapper-style regalia. But don’t worry – it’s plenty edgy and weird.

Antidotes was released in March 2008 and by June, it had landed two singles in the Top 40 in the UK and reached #3 on the album chart. Oh, and they quickly became a regular on British late night TV and got stateside praise from the likes of the New York Times. That summer, we shared the “Red Socks Pugie” video. From a backyard adventure to atomic explosions to a journey through the circulatory system, it’s all shot with a grainy, home-movie feel.

Foals kept that momentum going with yet another music video: we promoted “Olympic Airways” that fall. They’ve once again worked with director Dave Ma (who was also the mastermind behind the “Balloons” and “Red Socks Pugie” clips); this time, we’re transported to a clearing deep in the woods, where the band is performing. But as everything from tires to mattresses are thrown, it soon becomes clear this is no normal show.

Since then, Foals have released five more albums: Total Life Forever (2010), Holy Fire (2013), What Went Down (2015), and most recently Everything Not Saved Will Be Lost – Part 1 & 2 (2019). Holy Fire was their first album on Warner Bros. Records and they continue to kill it on the charts: Everything Not Saved Will Be Lost – Part 1 reached Number 2 on the UK Albums chart and Number 58 on the US Billboard Top 200; Part 2 hit Number 1 in the UK. With loads of touring, they’re known as one of the UK’s top live acts, and have also since released several live EPs. They’ve been nominated for several awards and won multiple NME Awards (“Spanish Sahara” and “Inhaler” won Best Track in 2011 and 2013, respectively; What Went Down won Best Album in 2016) and Q Awards (Best Live Act in 2013 and Best Act in the World Today in 2015). And with two albums released this year, we have a feeling they won’t be stopping any time soon!