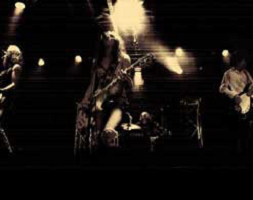 Red Lion, Pennsylvania natives Elizabeth “Lzzy” (yes, the missing “i” is intentional) Hale (lead vocals, guitar, keyboards, and piano) and her brother Arejay Hale (drums) have been making music together for over two decades, since before they were even in high school; they released an EP, Don’t Mess With The Time Man, in 1999. Guitarist Joe Hottinger joined Halestorm in 2003, and bassist Josh Smith joined in 2004. In 2005, Halestorm signed to Atlantic Records, ready to bring their hair-raising, hard-rocking music to the masses.

For a band that spends the majority of the year on the road (they often play well over 200 shows a year, and have shared the stage with everyone from Alter Bridge to Papa Roach to Shinedown), it comes as no surprise that Halestorm’s first release on Atlantic Records was a live EP, One and Done (2006). Of course, it was only fitting that the music video for “Takes My Life” was a live clip as well. Sure, there are bright lights shining on the stage, but the real electricity here is in the band’s performance. It’s raw, grainy, and candid, and gives a glimpse behind-the-scenes into the band’s life on the road.

Halestorm spend loads of time on the road; head to the band’s website to see if they’ll be in a city near you!

We’ve been big fans of Halestorm from the start, and we’re thrilled to see what they do next! We can’t wait to see who becomes the next break-out artist. Do you think your video has what it takes to be the next break-out smash hit? Get in touch with Andy Gesner and the rest of the HIP Video Promo team by giving us a call at (732)-613-1779 or emailing us at info@HIPVideoPromo.com.