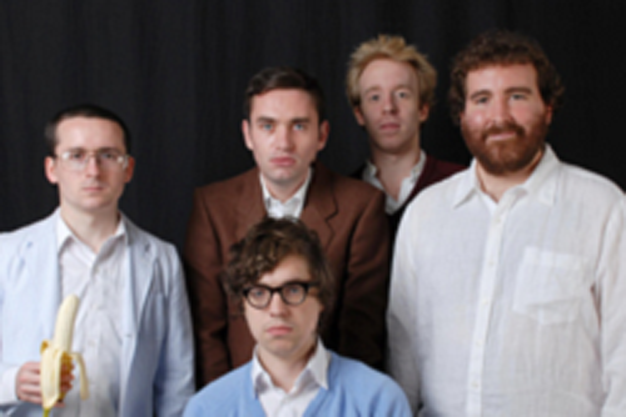 Originally formed in 2000 as a bedroom recording project, Hot Chip quickly became not just a British phenomenon but a worldwide sensation. Their indietronica sound is playful, yet very witty, pleasing fans and critics far and wide. The group consists of multi-instrumentalists Alexis Taylor, Joe Goddard, Owen Clarke, Al Doyle, Felix Martin; Rob Smoughton and Sarah Jones, as well as others, have occasionally joined the group for live performances.

In 2006, everyone from NME to Rolling Stone praised Hot Chip’s sophomore album The Warning, which was released on EMI Records in the UK and Astralwerks in the US. Lead single “Over and Over” first reached number 32 on the UK charts that month and number 27 after a re-release in October. NME named it their song of the year in 2006 and Pitchfork also placed it in their list of top tracks. “Over and Over” is an insanely catchy earworm that reminds the listener that “the joy of repetition really is simple”. For the video, they paired up with notable director Nima Nourizadeh (Franz Ferdinand, Santigold, Lily Allen). It primarily takes place in front of a green screen, where – with bored expressions and glazed-over eyes – the band play with simple props hinting at some unseen special effects.

In 2008, Hot Chip followed The Warning with another album, Made in the Dark, which peaked at Number 4 in the UK. The album’s second single and video, “Ready for the Floor” came amidst serious buzz, as the band performed stateside on talk shows like Jimmy Kimmel and Carson Daly; by the end of that year it was nominated for the Grammy Award for Best Dance Recording. They worked with Nourizadeh once again for the “Ready for the Floor” video, which casts singer Alexis Taylor as The Joker and torments his bandmates like pawns in a video game. It’s calculated and sinister, but the bright and clever use of color make it hypnotic and fun – much like the song itself.

Hot Chip have since released four more albums: One Life Stand (2010), In Our Heads (2012), Why Make Sense? (2015), and A Bath Full of Ecstasy (2019). They continue to tour the world regularly, bringing their energetic, improvisational shows to all corners of the globe including festival sets like Coachella! Check out HotChip.co.uk for more.