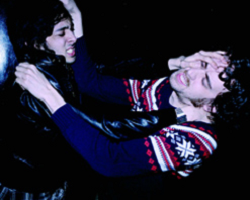 The French have a certified history of birthing funky electro-pop artists. Justice’s groovy waves might be similar to another DJ offspring, but their vintage disco and house foundations are unparalleled. Gaspard Augé and Xavier de Rosnay’s stylish and slightly tongue-in-cheek style defined their label, Ed Banger Records, but grew bolder and more unexpected as time went on. The vitamin-enriched electro beats of “We Are Your Friends” beat out Kanye West for an MTV Video Award in 2007. Once the misunderstanding was cleared, director So_Me became a constant source of inspiration for West.

After their evolution, Pitchfork declares, “Justice takes this history of the French rave era and blows it out by embracing 21st-century stadium-rock production.” One of the most iconic dance-rock bands of all time boasts a multi-generational appeal, allowing both parents and children alike to jam out in unison. Justice’s remix of MGMT’s “Electric Feel” won a Grammy for the Best Remixed Recording, Non-Classical in 2008, and Woman Worldwide (2018) also won a Grammy award for Best Dance/Electronic Album.

We promoted “D.A.N.C.E.” in 2007, Justice’s most famous song that has garnered over 98 million streams on Spotify. The concept is straightforward: two young men in plain tees, walk through a dance club – and as they do, their shirts change, and often in fascinating and hilarious ways. We only see their torsos, acting as a forward-moving canvas that is interspersed by a tunnel made out of the legs of dancing-girls and hands raised at a sold-out concert showcasing a wild thrill-ride through the heart of the Technicolor city.

Justice has never followed the rules, and in 2018 they began to pave the way for a new set of boundaries in their video for “Love S.O.S..” At an ultramodern night club, an extreme bodybuilder gives his performance on the strip pole, covered in scars and despair permanently etched on his face. The lavishness ends when the dancer breaks through the glass and attacks the audience, doing whatever it takes to set himself free.