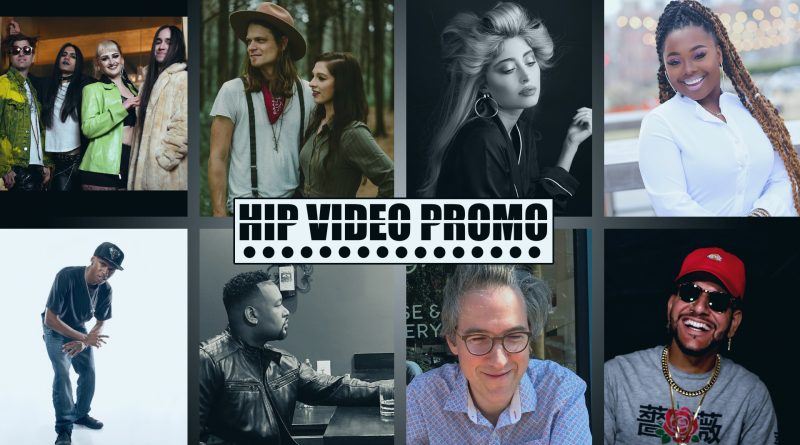 WordPress Image Carousel
Summer is for trips to the beach, ice cream, cookouts, and… loads of killer new music videos! Our newest HIP Picks – Weekly Client Roundup is here- take a look at the videos above, and learn more about the clips by clicking on the links below.

From Brooklyn to the whole world (and maybe the whole universe), Makes My Blood Dance have fused everything from metal to disco to glam to electro-pop. Lead singer Evan Saffer conceived the visuals of “Power Of The Lightside”, a track that details his very personal tale of survival. But make no mistake: this clip is a damn good time, as Saffer assembles and leads a motley, barely-clothed workout class.

In Reagan Elkins’ thoroughly entertaining clip for “Revival”, the latest single by The Imaginaries, Maggie McClure and Shane Henry play a pair of Old West bank robbers who have tired of the lifestyle. But this real-life folk/Americana duo aren’t hanging up their boots – the momentum is flowing, with songs placed on shows on NBC, CBS, E!, and the Hallmark Channel, and having shared stages with Etta James, B.B. King, Buddy Guy, Sara Bareilles, Walk Off The Earth, and Johnny Winter.

The Imaginaries make music that is at once familiar and deeply person, with melodies and instrumentals deep in the American folk-rock and country tradition, but a distinctive storytelling that’s theirs alone. In “Thinking ‘Bout You” (also directed by Reagan Elkins), we see the two music-makers, clearly in love with each other, with the rustic country where they live, and the joyous sound that they make.

“Give It To Me Baby” Music Video: Trav Torch (R&B)

Maplewood, NJ singer and inveterate love man Trav Torch is up against the same curfews and lockdowns we all are, but he’s not about to let that stop him from having fun. “Give It To Me Baby”, the new single and video from Bachelor Life 2, is accompanied by a clip that shows just how hard this pandemic has been on lovers. In the new TroopHouse Films clip, Trav’s got love on his mind, but with his girlfriend holed up elsewhere, they’ve got to be creative in their connection.

Within gospel, few are more respected than Jekalyn Carr, who – among other accolades – topped Billboard’s Gospel Albums chart with recent releases One Nation Under God and The Life Project, brought home the Dove Award, has been nominated for three Gospel Grammys, and seen love from BET Gospel. The “Changing Your Story” clip consists of concert footage; people in the crowd are shown to be inspired, uplifted, and spellbound, with Jekalyn herself holding center stage.

Born and raised on Guadalajara and currently based in Montreal, Shiadanni’s music nods towards the many places she’s been. The singer is the creative mastermind behind all her music videos, including “Kitty Mama”, which is held in a stylish club that broadcasts dangerous exclusivity. It’s no surprise to us that the clip has already been viewed over four hundred thousand times on YouTube.

There’s a warm tropical wind blowing through modern pop, and Shiadanni has becom an indispensable figure in the genre, drawing from late-night R&B and moody, intoxicated hip-hop. The nefarious mood of “Kitty Mama” is sustained in “Turn On My Brain,” as Shiadanni sits at a sumptuous banquet with a captive man.

Pastor Jamaal stands at the intersection between trap music and preaching, between hedonism and salvation, and this sound has helped win him “Best New Artist” at the CSRA Hip-Hop Awards. God Told Me To Do This is his debut set under this name, and it topped’s Amazon’s Christian Rap Albums chart for two months. To celebrate this, he’s sharing Pierre Liquidsmoke Luke’s clip for “Different”, which tells his story of salvation in a progression of images.

The songs and stories on Tris McCall’s McCall’s Almanac are the fruits of a search that began in 2015, with each representing a different American city. The tale of “The Unmapped Man” – which represents New Orleans – approaches themes like fears of surveillance, heightened sexual ambiguity, the desire to opt out of the digital network, and the desperate need for misfits to find a place where they might fit in. Rob Fitzgerald’s lyric video is decorated with vintage footage of the Big Easy, showcasing it as a weird and alluring place, the type of place “The Unmapped Man” himself would love.

From a motorcycle accident to dropping out of UCLA twice, it’s safe to say that Indian rapper TripleYoThreat probably shouldn’t be here. But guess what? He sure is, and “Always Lookin’ Fly As Fuck” – the first single off the Joie De Vivre EP – puts his larger-than-life side on the forefront. Videographer Silver Alcid gives the clip an endless summer vibe, as Trip shows off some killer fit: business, casual, even a traditional Indian kurta. He’s even joined by model and Continental Miss World Philippines USA contender Jossah Brizuela for an afternoon by the sea.