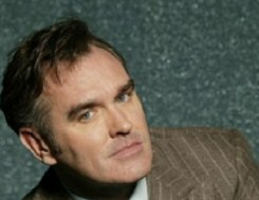 From his humble beginnings in Manchester, UK, to touring the world with The Smiths and later his solo career, Morrissey has an extremely devoted fanbase for several decades now. After forming in 1982 alongside Johnny Marr, The Smiths soon attracted national attention with their self-titled debut album. The Smiths would go on to release three more albums: Meat Is Murder (their only number one on the UK charts), The Queen Is Dead, and Strangeways, Here We Come. The band broke up by the time Strangeways was released, and Morrissey had already enlisted Stephen Street as his personal producer and songwriting partner. Viva Hate, his first solo album, came out in 1988; his first solo performance at first solo performance took place at Wolverhampton’s Civic Hall that December.

After a musical hiatus from 1998 to 2003, Morrissey released his comeback album, You Are The Quarry, in 2004. That summer, we had the absolute pleasure of promoting two music videos from that album: “First Of The Gang To Die” and “Irish Blood, English Heart.” “First Of The Gang To Die” tells the tale of Hector, a street-tough-guy who’s somehow both dashing and silly. But on screen, it’s Morrissey who’s romanticized, as he kneels and looks to the heavens on stage in front of a jampacked concert hall.

“Irish Blood, English Heart” was the first single and video from You Are The Quarry. Here, he’s shown in a basement club with no elevated stage, and those around him are less than thrilled. That doesn’t matter, as Morrissey is as mesmerizing as ever.

Just under five years later, we had the pleasure of working with Moz once again. In February 2009, he released the album Years of Refusal, and we promoted the video for “I’m Throwing My Arms Around Paris.” Once again, his magnificent performance skills were on display – though this time, he and his band were shot against a white soundstage. There’s a pair of cute dogs on screen, but Morrissey clearly steals the show.

Since we worked with Morrissey, he’s released three more albums: World Peace Is None of Your Business (2014), Low in High School (2017), and California Son (2019). This September, a few months after the release of California Son, he released a lyric video for “Loneliness Remembers What Happiness Forgets”, a cover of Dionne Warwick’s classic track.

He continues to tour and, as a longtime vegetarian, is a dedicated supporter of animal rights.  He recently completed yet another successful tour all across North America, and we wouldn’t be surprised if he hits the road again soon. For more on this English singer, head to MorrisseyOfficial.com.