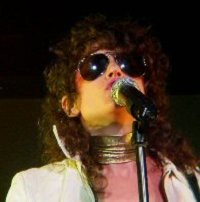 Sex and gender stigmas have been set in stone for ages; it wasn’t until recently that people began to be more open about the topics. To break the shame around gender roles and explicit content, the conversation needs to be normalized in mainstream culture. Thankfully, Peaches has been breaking the ice since 2000. Her electro-pop songs blur the distinction between men and women and shatter the stereotypes between roles and appearances. She appears with a full beard in her third album cover, Fatherfucker, an opposition against the word “m*therfucker.”

Peaches is a musician, producer, and director, but most importantly, a feminist. Not only does she think outside the box, she redraws the narrative to support sexually progressive content. She has collaborated with Daft Punk, Iggy Pop, and Major Lazer, and her work has been studied all over the world. Not only is she a prolific musical artist, but she is also a creative visual artist; her visionary stage shows were displayed at Art Basel Miami and the Venice Biennale.

While the music video for “Set It Off” might be rated-R, it is a must-see. Peaches is the nucleus of this sensual energy; two different clips are pieced together, one of Peaches’ face above another clip of her body. Her facial expressions are tied between being neutral and funny while her body flaunts a tight tank top and underwear dancing silly, but erotically. Peaches shows us that not only is it okay for music to be about sex, but that music videos can be too.

More recently, Peaches released “Close Up” ft. Kim Gordon in 2015, an exaggerated version of WWE. Gordon is Peaches disinterested wrestling coach and vapes the entire time Peaches is competing. Each round puts more body fluids onto the ring, and eventually, all hell breaks loose, and Peaches ends up making out with her last opponent. Gordons gives up on her and leaves her in the ring with her supposed “rivals.”