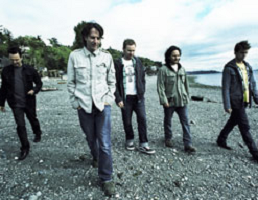 When thinking back to the groups that defined alternative and grunge music in the early 1990s, Pearl Jam is one of the first names to come to mind. Being fans of the genre, the entire HIP crew throughout the ages have been Pearl Jam fans but for a while, we never though we’d get to partner with them – after all, they rarely make music videos! But in 2009 we had the chance of a lifetime to work with the Seattle natives to promote the clip for “The Fixer”, the lead single from their ninth studio album Backspacer, and wow- what a clip. It shows the band in their natural element: in front of an audience. Lead vocalist / rhythm guitarist Eddie Vedder, guitarists Mike McCready and Stone Gossard, bassist Jeff Ament, and drummer Matt Cameron are going as hard as they can – and so are their fans.

The music industry is full of rules and best practices, and over the course of their career, Pearl Jam have broken several of them. They famously boycotted Ticketmaster. They avoid interviews. They almost never make music videos. But maybe it’s this rule-breaking that has helped Pearl Jam stick around as long as they have. They released their tenth studio album, Lightning Bolt, in 2013, and it was their fifth album to debut at number one on the Billboard 200 chart. Per the RIAA, they’ve sold 31.5 million records in the US with an estimated 60 million sold worldwide.

Pearl Jam continues to tour regularly; they’re set to hit North and South America as well as Europe in 2018. Head over to their website, pearljam.com, to see a full list of upcoming shows (including Eddie Vedder solo dates).

We’ve been fans of Pearl Jam since day one, and we’re eager to see what else they have in store for the future! We can’t wait to see who becomes the next break-out artist and defines this decade to future generations. Do you think your video has what it takes to be the next break-out smash hit? Get in touch with Andy Gesner and the rest of the HIP Video Promo team by giving us a call at (732)-613-1779 or emailing us at info@HIPVideoPromo.com.