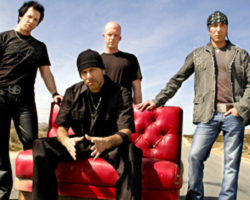 In 2001, Leigh Kakaty formed Pop Evil out of members of other Michigan bands. After independently release the album War of the Roses in 2004 and the EP Ready or Not in 2006, they signed a management deal with G&G Management.

We worked with the band for the first time in 2006, promoting their video for “Somebody Like You.” “Somebody Like You” was a fan and live-show favorite that was first included on the Ready or Not EP. Director Jason Honneycut has paired Britt Koth (from MTV’s 8th & Ocean) and Rossi Morreale (who hosted shows on the Style and Speed Networks) as the two love interests.  Meanwhile, Pop Evil are rocking out in front of a roadside diner.

In August 2008, Pop Evil released their debut studio album, Lipstick on the Mirror, via Pazzo Music (it was later re-released in 2009 via Universal Republic). That fall, we worked with the band once again to promote their music video for “Hero” from the Lipstick album. For this video, they’ve once again teamed up with Jason Honeycutt to create what almost feels like a mini-movie, as it takes place inside a forgotten warehouse.

Pop Evil have continued to release albums regularly: War of Angels in 2011, Onyx in 2013, Up in 2015, and most recently the self-titled Pop Evil in 2018.  The band currently consists of Leigh Kakaty (lead vocals), Dave Grahs (rhymth guitar / backing vocals), Matt DiRito (bass / backing vocals), Nick Fuelling (lead guitar / backing vocals), and Hayley Cramer (drums). Always the regular road warriors, in 2019 they toured Australia and the US, even opening select shows for Disturbed. This winter, they played several acoustic shows in the Midwest, and we won’t be surprised if they hit the road again this summer! Check out www.PopEvil.com to see what’s next.