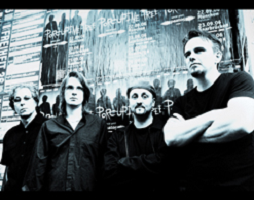 Here at HIP Video Promo, we’ve been working hard to promote music videos since the year 2000. It’s important for us to help younger and independent artists get the recognition they deserve. It’s exciting to be on the ground floor with artists that become household names (and with over 3400 videos under our belts in 20 years, there are quite a few). Every Friday, we’ll share a “Flashback Friday” video, where we get to reflect on one of our favorite videos from a few years ago.

What started as a solo project in the mind of musician Steven Wilson in 1987, transitioned to occasional freelancing collaborators to form the first permanent lineup of Porcupine Tree. The progressive rock band consists of Wilson as the vocalist, Richard Barbieri as the keyboardist, Colin Edwin as the bassist, and Gavin Harrison as the drummer. Throughout a career spanning more than 30 years, Porcupine Tree has been known to shift genres; their earlier sounds evoked a psychedelic sound, later approached an alternative rock sound when signing to Kscope, and finally moved to the classic progressive rock style they’re known for now. Metalheads love them for their grim textures, bleak lyrics and delivery, and inflexible stance. Modern rock listeners admire their cinematic soundscapes and for Wilson’s magnificent guitar playing. While they have released ten studio albums, achieved a cult following, and influenced many new artists, Porcupine Tree managed to stay out of mainstream music. Publications such as Classic Rock and PopMatters described them as “the most important band you’d never heard of.”

The mischief our protagonists find themselves in isn’t the usual youth behavior like staying out past curfew or failing a test. Instead, the kids in the 2007 music video “Fear Of A Blank Planet” already have desolation in their eyes as they down pills with soda without hesitation. They actively indulge in vices like drugs, fighting, and vandalism and stare through the camera as they make bleak eye contact. Interestingly, their eyes turn the transparent pale blue of a television set on the fritz, supposedly receiving transmissions from another zone, which causes them to act this way. Why? We don’t know, but it’s definitely a portrait of modern nihilism.

In a more recent music video, “Lazarus”, Porcupine Tree slows it down and becomes more sentimental with vintage clips from childhood and intimate family moments. Closeup shots of the band with retro filters set the tone of this nostalgic clip. The piano-led track is one of Wilson’s proudest songwriting moments; it was originally written for a movie he was working on with a friend, but when it fell through, he still kept “Lazarus” as a song for the band to embrace.