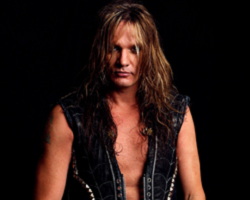 Although Skid Row gave Sebastian Bach his initial push to fame, he ran with that stardom post-breakup and made it his own. Since growing his solo career, the singer continues to make music while also appearing on Broadway, film, and television. The heavy metal renaissance man’s unstoppable persona and photogenic looks always made him the focus of the media. After the departure from Skid Row in 1995, Bach had a short musical attempt with an ex before going fully solo in 1997. He stayed busy touring with Guns N’ Roses, appearing on SpongeBob SquarePants, and Broadway productions for Jekyll & Hyde and The Rocky Horror Show.

It’s been 12 years since we promoted the “(Love Is) A Bitchslap” music video. The spirited clip of Bach shows him thriving in his element. Its concert footage of a wild and charismatic rocker in top form, dominating the stage, and keeping a packed house enthralled. Bach co-directed the video with a vibrant attitude going in; he might not have Skid Row anymore, but it’s evident he is doing well on his own.

The song title and video boast the same enticement, “Temptation” is filled with sexy models that are off-limits to Bach. The 2014 clip switches between seduction and him raging about the surrounding bait. The models are dressed in lingerie alluring Bach with all types of appetizing vices like sex, alcohol, and a distinct white powder. As he sings “Temptation / Gets the very best of me,” Bach submits to the sensuality in front of him.