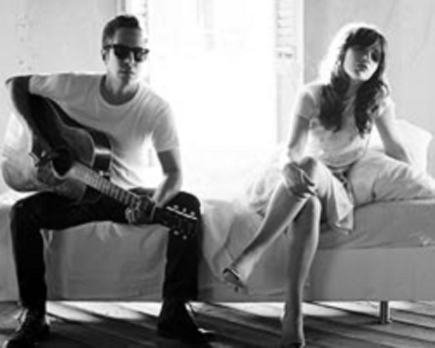 Imagine you're watching TV on a Sunday afternoon. You're just flipping through the channels, not really paying attention to what's on, and suddenly you come across a sitcom. You have a few laughs and get into the storyline, but what really captivates you is the main actress. You know her from somewhere. Wasn't she the love interest from 500 Days of Summer? That's right; she was! And she was also in Yes Man with Jim Carrey! You start to search your mind for her name, but you can't come across it. Admitting defeat, you google it and are elated to find out that it was none other than Zooey Deschanel. You love Zooey Deschanel! But hey… wasn't she in this great band a couple of years ago? That's right! You remember that they were on your road trip playlist. What were they called? You take a second, and like clockwork, you get the name: She & Him. You love She & Him! Who in their right mind wouldn't? Okay, snap back to reality: what a rollercoaster, right? Man, wouldn't it be great if you could catch up on all things She & Him and watch one of their best videos? Well, look no further than this Flashback Friday article!

It's exciting to be on the ground floor with artists that become household names (and with over 3400 videos under our belts in 20 years, there are quite a few). But before we get to the video that helped to make this duo a cultural phenomenon, we first have to talk about how She & Him came to be. It was on the set of the indie drama The Go-Getter where Zooey Deschanel first met guitarist M. Ward. While they didn't show up on each other's radars at first, things changed when the two of them were tasked with recording a duet for the film's closing credits. Working closely on the project, Ward and Deschanel realized that they had the same niche taste in classic country music and a kind of musical chemistry that couldn't be ignored. When the rest of the film's team left each other for greener pastures, Ward decided to stick around with Zooey and record what would go on to be their first album, Volume One: an indie-pop effort that was renowned for its use of country twang. Peaking at number 71 on the Billboard 200, the album would help the band gain access to the stages of Coachella, Bonnaroo, and, most importantly, SXSW, where they would be praised highly as a music festival must-see. A staple in the indie scene of the late 2000s, She & Him were a group that took to immense popularity like a duck on water. We first promoted "I Could've Been Your Girl" in 2013. Directed by Deschanel herself, the clip is reminiscent of a classic sockhop. Following in its footsteps was "Stay Awhile", an addition to the She & Him repertoire that shows their roots in the country stylings of the 1960s. A cover of a Dusty Springfield Top 20 hit, the video itself is a beacon of subtle simplicity as all that is shown is Deschanel, whimsically dancing throughout a house while Ward strums on an invisible guitar. There is no glitz or glamour that tries to subdue the viewers' attention. The video's real appeal is the romantic way each member of the duo taps into this sort of classic Nashville energy that doesn't have a care or concern in the world. It's a breeze of fresh air that tries to tell the audience that there's no need to make things complicated. Just enjoy the clarity of everything and come along for the ride.

While things in the music world are on halt for the time being, She & Him have decided to stay active. Aside from putting out pandemic-ready merchandise for the health-conscious music fan, Deschanel and Ward have decided to take part in a quarantine jam session to alleviate some of the public's shutdown boredom. It's a spectacle unlike any other, and you can get a full look at it on the She & Him Instagram page. Other than that, She & Him are in this fight just like the rest of us and can't wait for the day that they can tour again.