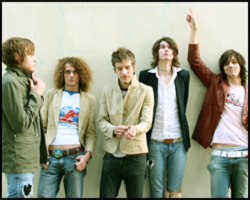 Whether or not emo-pop is still the rock radio powerhouse that it was back in the early 2000s, the genre has established its place in music history with a long portfolio of hit party-ready songs and bands praised for their abundant energy and versatility. Among these well-remembered bands is The Academy Is…, a Chicago-based quintet fronted by singer William Beckett who the BBC once defined as being “part Adam Lazzara, part Prince.” Signed to the Decaydance imprint of the Fueled By Ramen label back in 2004, this band rose to emo stardom alongside the likes of Panic! At the Disco and Dashboard Confessional, contributing heavily to the steadily-commercializing pop-punk sound of their time.

While many bands go out of their way to make their start in cities like NYC or Los Angeles, The Academy Is… felt comfortable getting their music dreams on track in the Windy City that they grew up next to their entire lives. Hailing from the northwest suburb of Barrington, William Beckett and guitarist Mike Carden got together after leaving rival high school bands in the hopes of forming a group that could play a show bigger than the ones held in their alma mater’s auditorium. Soon adding on classmate Adam Siska to the creative roster, The Academy Is… found themselves thriving all thanks to being in the right place at the right time. A local record label helped the band put out their first EP, which was quickly noticed by fellow Chicago native and pop punk heartthrob Pete Wentz who demanded Fueled By Ramen to sign the band and immediately put them on tour with his own group: the legendary Fall Out Boy.

“The Phrase That Pays” music video doesn’t start off like any typical video you’ve seen before. From the first second, fans are exposed to lead singer William strapped down in an ominous doctor’s office with an oddball physician and knockout blonde nurse telling him that he is in critical condition. Soon after, we find William alone in an all-white hospital bed making what seems like his last confession to the audience before he joins his band and sings about how death is coming sooner than expected and he’s gotta “take a chance and make it big.” And make it big he does when he lets out a little whisper and cute smirk to the nurse who then begins to dance for Beckett and his half-dead bandmates. If these were actually the last moments of “emo Mick Jagger” William Beckett as we knew it, fans would find some relief in knowing that he went out being the fun, flirtatious, and eclectic personality he truly is.

William and The Academy Is… went on to make three albums in their career with their last LP effort, 2008’s Fast Times at Barrington High, spawning their most well-remembered hit “About A Girl.” The band would continue touring together until 2011 and only reunite in 2015 to play at Riot Fest in their hometown of Chicago. Despite calling the Riot Fest performance their group’s “farewell” to the music scene, The Academy Is… then went on to play a sixteen date tour that same year and have never officially declared that the musical project is in the grave to this day.

We’ve been big fans of The Academy Is… for a long time, and we can’t wait to see what budding artist becomes the next break-out star. Do you think your video has what it takes to be the next worldwide smash hit? Get in touch with Andy Gesner and the rest of the HIP Video Promo team by giving us a call at (732)-613-1779 or emailing us at info@HIPVideoPromo.com.