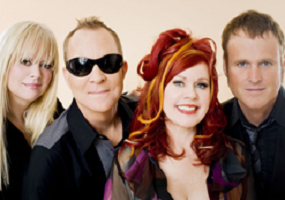 The B-52s are easily one of the most influential bands to come out of the early 1980s. Whether it was for their retro fashion sense, their fan favorite hit “Rock Lobster” or their reputation as huge figures in the LGBTQ community, the new wave group has earned a notable place in American pop culture. Hailing from the college town of Athens, Georgia, the band formed when siblings Ricky and Cindy Wilson shared a flaming volcano drink with three other locals and had an impromptu jam session afterwards. What came out of this musical experience was their budding friendship with eclectic individuals like Fred Schneider, a cowbell-playing poet who’d go on to be the band’s lead vocalist. The developing B-52s immediately took to an image reminiscent of 1950s fashion statements such as the beehive hairdo (whose cone-like shape inspired the band’s name) and liberally mixed the popular new wave music of the time with surf rock and dance influences. Clearly, this band came out with the intention of trying to set themselves apart from any other group.

Success came early on in the Georgian group’s career with their 1979 self-titled debut album going platinum and reaching the 59th spot on the Billboard Hot 100. Their 1980 follow-up, Wild Planet, also garnered a lot of well-deserved notoriety and produced concert go-tos like “Private Idaho”, a hit single which not only made it to the #5 position on the Hot Dance Club charts but also inspired the title for the independent film My Own Private Idaho, starring Keanu Reeves and the late River Phoenix. Just when the B-52s seemed to be on top of the world with their quirky songs and even quirkier mannerisms, tragedy struck in the form of guitarist Ricky Wilson’s AIDS diagnosis and eventual death right before the release of the band’s fourth album, Bouncing Off The Satellites. Being devastated by the loss of a beloved friend, sibling, and bandmate, the retro-rockers refused to take apart in any touring to promote the album and held off from recording or performing for two years. Following this hiatus, the remaining quartet came together and released Cosmic Thing, a comeback attempt that led the band back into super stardom with the help of popular tracks such as “Love Shack.” Most bands wouldn’t be able to bounce back from such a tremendous loss, but the B-52s pulled themselves together and have devoted their status as pop stars to bring more awareness to AIDS prevention in memory of Ricky.

It’s integral for any fan of the B-52s to not only listen to “Funplex” (the leading single from the 2008 album of the same name), but to also watch the music video that goes along with it. Thirty years after their inception, this new wave group proves that they still have what it takes to make great music and this time they have a message to go along with it. Set in a futuristic mall created by CGI technology, this music video takes a scathing look at the excessive outlet mall consumerism found in American culture. While female singers Cindy Wilson and Katie Pierson are lamenting about “heartbreak” and the frustrating troubles of a mall worker, security officers are shown in the background using excessive force against hippies protesting private property and mall goths. On the other hand, Fred Schneider is gleefully speeding around the mall on a Segway with a myriad of shopping bags on him. While at first he embraces the fast-paced lifestyle of a greedy American shopper (even going as far as yelling at food court workers), he soon admits that this cultural movement is “misery” and that it has caused him to need a pill, a reference to the increasing use of prescription drugs in the US. Even after so much time spent in the music business, the B-52s show that they still have the same talent that made them pop icons and that their music can be more than just hilariously quirky jokes.

Nowadays, the iconic B-52s have slowed down when it comes to creating new music, with 2008’s Funplex being their last album effort. In spite of this, the band continues to tour with other 80’s favorites like Tears For Fears, The Go-Gos and Cyndi Lauper. Outside of the band, members have had their own successes with Fred Schneider collaborating on songs with Jinkx Monsoon (winner of RuPaul’s Drag Race Season 5) and Katie Pierson appearing on the Hulu original series Difficult People. The B-52s have been through hell and back during the early stages of their career, but nothing can keep these Rock Lobster rockers from shining in the spotlight.

We’ve been big fans of The B-52s for a long time, and we can’t wait to see what budding artist becomes the next break-out star. Do you think your video has what it takes to be the next worldwide smash hit? Get in touch with Andy Gesner and the rest of the HIP Video Promo team by giving us a call at (732)-613-1779 or emailing us at info@HIPVideoPromo.com.