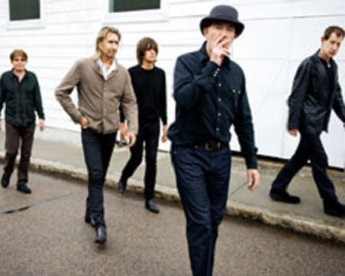 Cy Curnin (vocals) and Adam Woods (drums) began playing together in 1979, when they were in college in London, under the name Portraits. With bassist Charlie Barrett, keyboard player Ruper Greenall, and guitarist Jamie West-Oram, The Fix was born. The Fix released their first single “Lost Planes” on 101 Records in February 1981, receiving radio exposure on BBC; as they grew in prominence, they eventually signed to MCA Records and changed the spelling of their name to The Fixx. Barrett left after the group’s first album, but would return later on in 2008 and would play on their tenth album Beautiful Friction (2012).

Over more than three decades, they drew comparisons to the likes of U2 and Against Me, as well as plowing their own path in the world of new wave music. Beautiful Friction drew its name from the background of self-responsibility and need for accountability that it creates; Curnin says, “It seems we’ve all ground to a bit of a halt with so much unrest, the Occupy movement, debt, war and more. We ultimately see this album as positive, eager for the dawn of a new era, the possibility to change the way we see the world and to view it with more optimism. That’s why we called it Beautiful Friction – the times we live in are tough, but there’s a beauty in that. There’s a hope.” Just after the album was released in July 2012, we had the pleasure of working with The Fixx to promote the video for “Anyone Else”, the opening track on Beautiful Friction. Here, a group of rebellious teens show us what it’s like to conquer through the power of peace. But… look close: is someone watching over them? Who is it, anyway?

Prior to the Covid-19 pandemic, The Fixx have continued to tour regularly (and we expect they’ll return to the road when it’s safe to do so!). Curnin also continues to release music as a solo artist, most recently releasing Lockdown, his sixth solo effort and first since The Horse’s Mouth in 2013, in April of 2020. If you’re curious to learn more about Cy Curnin and The Fixx, check out this incredible, career-spanning interview on Art19.com.