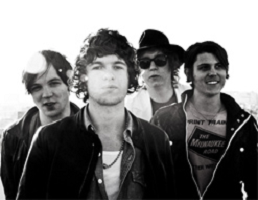 The Kooks made their first appearance in 2005 and were greeted as an instant sensation. During a semester at Brighton Institute of Modern Music, six students came together and formed the band. Since 2004, The Kooks have released five studio albums. Their debut album Inside In / Inside Out released in 2006 reached number two on the UK Albums Chart, while the follow-up album Konk peaked at number one.

The Kooks approached us in 2006 before they’d made a name in America. The Kooks are hooky, tuneful, and pop-smart, and that style is perfectly defined in “Eddie’s Gun.” The music video is very frank and very brash while also reflexive and self-aware. The band performs constricted in plastic parameters, but by the end, the members each knock down a white door and busts free of its fetters.

Next, we worked on the most popular song to date, “Naïve.” The music video is a face value love story, including the issues. This love story doesn’t end the way we wanted it to: the thematic undercurrents portray the perils of the rock and roll lifestyle, the lure of intoxication, the strange interchangeability of identity under the stage lights.

The second most popular song, “She Moves in Her Own Way,” announces the group’s intention to take the Western Hemisphere by storm. The music video shows a compilation of The Kooks in Mexico during their tour, performing throughout the city and hanging out in luxurious pools while showing off their rockstar charisma and natural grace.

Finally, “Always Where I Need To Be” off of Konk is similar to “She Moves in Her Own Way,” but instead, they explore New York City. The Kooks roam through Manhattan streets, play atop a Kingsborough warehouse, and even indulge in a quintessentially Gothamite activity – attending a casting call. The clip has a gentle, hand-held quality that draws the viewer closer to the group; it’s a concession to the intimacy that Kooks fans worldwide want with their heroes.

Though The Kooks began more than a decade ago, they show no signs of slowing down anytime soon. Back in November 2018, they released a strong music video for “Pamela.” The band jams out on the beach with deadpan expressions; they don’t look happy, sad, excited, or mad, just neutral. They mess around and act silly, all while looking unamused. The Kooks have such a comfortable personality that they can act any way they want in their videos, and it adds to their charisma.