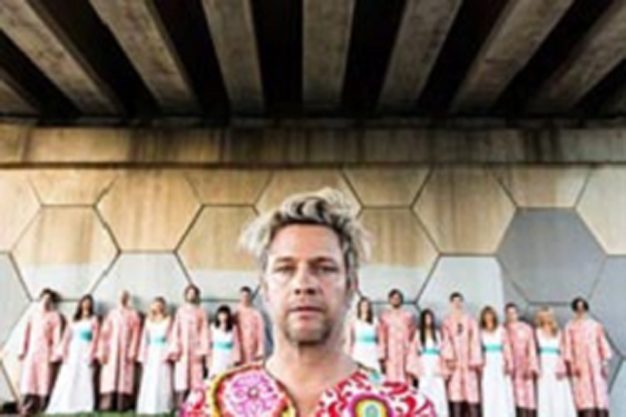 The Polyphonic Spree formed in 2000 as a collective of thirteen musicians, blending choral and rock music with a variety of instrumentalists and vocalists. Their eccentric music has been featured on some well-known movie and TV soundtracks, such as Eternal Sunshine of the Spotless Mind, Mozart and the Whale, and Keeping Up with the Steins.

In November 2012, we first worked with them to promote the“Silver Bells (Reprise)” video, where Tim DeLaughter’s joyous vocals were put to perfect use, spreading holiday cheer. Just one of several clips from their Holidaydream album, it was a warm welcome to the most wonderful time of year. Here, DeLaughter whimsically dances through Santa’s workshop. But it’s not toys that’s being made: it’s Holidaydream LPs, shot at a real pressing plant in Dallas.

Two years later, in the summer of 2014, we worked with The Polyphonic Spree once again to share two more videos: “Hold Yourself Up” and “You Don’t Know Me.” While touring the world in support of their album Yes, It’s True, we shared two more videos. “Hold Yourself up” is a fitting introduction to their wondrous original sound, with a video that shows an emotional narrative while capturing the band’s essence and energy. “You Don’t Know Me” finds them exploring slightly darker musical tones while showing defiant determination.

The Polyphonic Spree released another album, Psychphonic, on Good Records and Kirtland Records, in the fall of 2014. They continue to tour regularly and bring their electric, electric music to stages all around the country and world! Check out their website to see if they’ll be in your area.