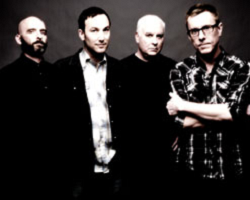 From friends working at a local record store to ’90s independent hitmakers to elder statesmen (and stateswomen), Toadies are a beloved name in the indie rock world. “Possum Kingdom” became their breakout hit from the 1994 album Rubberneck, a favorite on college radio stations and at live shows all over. Interscope Records rejected their follow-up effort Feeler, which meant it wasn’t until 2001 that the world heard another release from Toadies with Hell Below/Stars Above. Shortly after, the band broke up, releasing Best of Toadies: Live From Paradise, a live album recorded at Boston’s beloved Paradise Rock Club.

In February 2003, we shared their “Tyler” video. It’s a signature Toadies tune, and the video – directed by Fabio Jafet – captures the adrenaline-fueled energy of Todd Lewis’ taut and vaguely menacing vocales and Lisa Umbarger’s incessant and insistent bass line. Check it out below!

Toadies reunited just a few years later, in 2006, and in 2012, we promoted their “Summer of the Strange” video from their album Play.Rock.Music.. Warning: this one is not for the faint of heart! Lewis is fighting off a monster… or maybe it’s his own demons… but don’t fret, there is lightness to the video in the band members’ uninhibited acting abilities.

In 2014, Toadies celebrated two decades of Rubberneck with a 20th anniversary reissue of the album on Kirtland Records. They also went on tour in celebration where they played the album in full every night! The following year, 2015, they supported Everclear on tour and released their eighth studio album Heretics, which featured reimagined versions of classic Toadies tracks. Toadies released their ninth album, The Lower Side of Uptown, in 2017, and we can’t wait to see what’s next for this classic group.