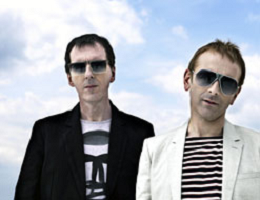 Here at HIP Video Promo, we’ve been working hard to promote music videos since the year 2000. It’s important to help younger and independent artists get the recognition they deserve, and it’s exciting to be on the ground floor with artists that become household names (with over 3400 videos under our belts in 21 years, there are quite a few). Every Friday, we’ll share a “Flashback Friday” video, where we will reflect on one of our favorite videos from a few years ago.

It’s not inaccurate when people say the best electronic dance music is European- it did, in fact, originate from there. The British duo, Underworld, was at the forefront of the underground scene mounting to headliners at some of the top music festivals in the world. The techno duo, Karl Hyde and Rick Smith, have pulsated beats through club dancefloors and even provided soundtracks to the opening ceremony of the London 2012 Olympic Games. The group’s 1994 album, dubnobasswithmyheadman, is universally recognized as a cornerstone of contemporary electronic music and helped define the genre. Underworld has been on the scene for over three decades; they have watched old-school EDM be taken over by new school yet have always adapted to the rapid change while sticking to their original sound.

It was 2010 when we promoted Underworld’s music video, “Always Loved A Film”, a dance-worthy and house-rocking track. The clip follows the misadventures of a team of skateboard hoodlums as their antics become increasingly destructive. Surprisingly, the expected young boys we thought these would be turn out to be middle-aged. Despite their old looks, they have teenage mischief written all over. As we watch vandalism, trespassing, and minor harassment, the clip is oddly inspiring; no matter how old we get, there will always be a bad side that is young at heart.

It was nearly 25 years ago when Underworld gained traction with their most popular song, “Born Slippy (Nuxx).” In 2015, alongside The Creative Commission, they decided to reimagine the music video. The winner of the remake? Michael McCool. The slow-motion black-and-white visual alters between a racing dog on the beach and a classic teen-movie type party in the woods- bonfires, dancing, and lots of various arson. The end picks up, and as the speed of the video reverts to its normal pace, the dog is running at full speed to wherever it needs to go.