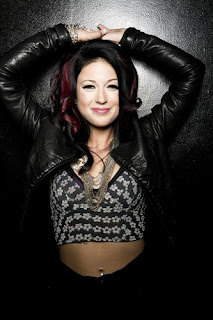 Coming Soon…
In 2007, Amanda was one of the thousands who auditioned for American Idol, and made it to the final fifty. She was cut in the final round before the choosing of LA’s winning contestants occurred. However, this did not slow Hawkins down one bit! Amanda headed back to Denver continuing her dreams of singing and songwriting by performing at local clubs. Her demo Who is Jane Doed?sparked an interest for Joey Carvello, the man responsible for introducing artists such as Marc Anthony, Pitbull, Lil Jon, and the Ying Yang Twins to the contemporary music scene. Within three weeks, Amanda became the newest addition to Strictly Rhythm Records’ roster. The authenticity of Amanda’s sound is utterly groundbreaking and downright fun, and we see this in the energetic video for “Get Back in Line.
The clip offers a divine sense of confidence and strength for this budding singer/songwriter, and we watch as she boldly makes the statement that she won’t be backing down anytime soon. Ex-lovers and potential lovers are seen shot down by Amanda as she performs in a nightclub, singing to fans who are downright entertained. From city rooftops, her and her best friends discard the remnants of her ex-lover’s belongings by throwing them into the wind.
Pictures serve the purpose of her memories, yet Hawkins portrays a constant strength and fluidity that is utterly impressive throughout the video clip. The song itself is reminiscent of artists like Duffy and Adele, but “Get Back in Line” is a positively radiant whirlwind of lasting musical creation.