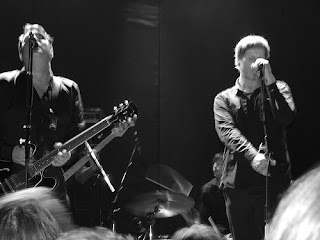 Dark duo Gutter Twins released an EP exclusively on iTunes titled Adorata this week. Some of the proceeds from the album are benefiting the Natasha Schneider Memorial Fund, created for the late singer from the band Eleven, who died from cancer this year.

Gutter Twins are well-known for their brooding themes, for delving into religion and drugs, death and destruction, as well as a focus on the mystical–all within the context of bluesy rock. But on this EP, they show off more than just their usual. Other dimensions of their musicianship emerge, and they dodge a little into funky rhythms, and the mournful traditional balled of “St. John’s Infirmary.” And then they bring it back around to good old Gutter Twins sound by the use of dark string arrangements and chilling vocals.

The songs include two original tunes, “Spanish Doors” and “We Have Met Before,” as well as a “Flow Like a River” cover, a song written by Eleven.

Check out the video for “Idle Hands,” off of their recently released album Saturnalia, below.