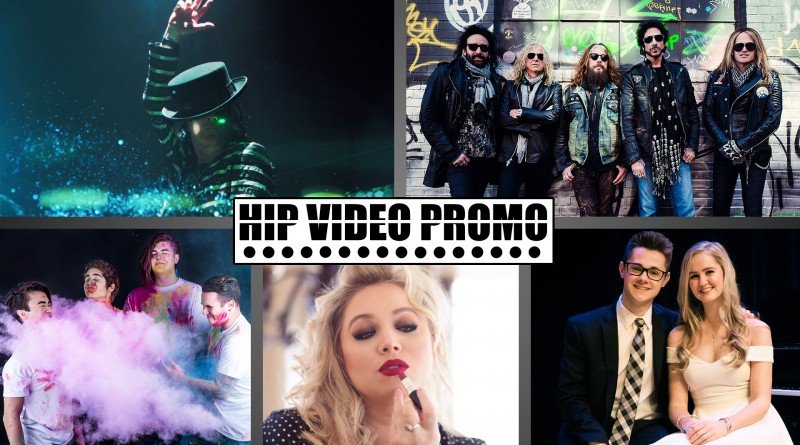 Repeat business is the surest sign of client satisfaction, and here at HIP we’ve had several clients return time and time again. This week we’ve got a few longtime members of the HIP family returning with new efforts, as well as some promising new acts. The newest HIP Picks – Client Roundup video gives you the low-down on some of our current projects, and we’ll tell you a little bit about each one below.

It’s been ten years since we first worked with Juno Reactor to promote the video for “Inca Steppa”, and now the trance and house giants are back with another electrifying, kinetic video for “Let’s Turn On”. One look at the “Let’s Turn On” video and it’s no surprise to hear Juno Reactor has composed music for The Matrix series of movies and video games. The clip features illuminated “robots”, dancers in suits of LEDs and lasers and reflective surfaces, as all things whirl, glow, and flash in perfect time with the beats.

Since 2013, The Dead Daisies have paved their own path for success, and here at HIP we’ve had the pleasure of working with them to promote several videos over the past few years. The group- who are currently comprised of guitarist Doug Aldrich, singer John Corabi, bassist Marco Mendoza, drummer Deen Castronovo, and rhythm guitarist David Lowy – released their fourth studio album Burn It Down this spring. Their latest visual, “Rise Up” (currently top 40 on the Active Rock charts for both Media Base and BDS) is a commentary on the world we live in today, and shows the destruction we as a society are causing to the earth.

John Paciga was only 17 when he recorded his first album Other Side Of Town, a masterful collection of catchy piano pop, and still in high school when we promoted his clip for “Tickling The Ivories”. He’s now newly graduated and has teamed up with fellow local singer Charlotte MacMurray for a new song and visual. The duo have shared their take “The Prayer”, a song originally by David Foster and Carole Bayer Sager and made famous by Andrea Bocelli and Celine Dion. Paciga and MacMurray take to the stage in the Delbarton auditorium to perform the song, and as impressive as it is, what’s most impressive is realizing this is just the beginning.

Eryn (and yes, it is just Eryn: she prefers not to have a last name because she doesn’t belong to anyone) is a one-woman powerhouse with a larger than life personality and force of nature voice. She classifies her sound as “retro-pop”, putting a modern spin on soulful blues. Eryn recently released her debut EP Lady E, which includes her single “Hallelujah You’re Gone”. “Hallelujah You’re Gone” was directed by William DeVizia and filmed at The Wonder Bar in Asbury Park, and shows that Eryn has had the last laugh as she rejoices that toxic people are no longer in her life. And one thing is for certain: this Garden State girl knows how to party but is still incredibly classy.

Who is Who We Are? The members of this Los Angeles band are primarily still teenagers (Robby Craig is the odd man out at 25 and acts as the group’s main mentor), but they’re no stranger to taking a different path in life and working hard to pursue their dreams. They recently released their debut self-titled EP, and thanks to video director Johnny Young, the single “Memory” features a collaboration with Escape the Fate guitarist Kevin Thasher. Filmed in the San Fernando Valley in California, “Memory” is the group’s first official video and shows Nikko struggling to mend a tumultuous relationship with his family. The lyrics are heavy but the teenage angst and family tension are shared in a way that plenty of people can surely relate to.