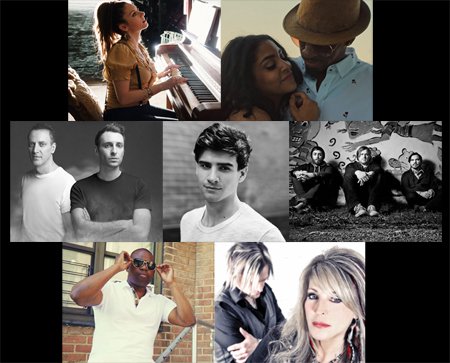 Can you believe we’re more than halfway through August? It’s still summer, but we’ve had a mix of sunny and rainy days here in New Jersey. Yet no matter the weather outside, we’re hard at work at HIP HQ. The more videos we promote, the more of a variety we realize there is, and this week we’re showcasing a great mix for you. The newest weekly client roundup video gives the low-down on some of our current projects, and we’ll tell you a little bit about each one below.

Up first is “Wrong”, the debut video and single from EDM duo MaWayy. It’s the perfect summer song, and feels warm and sunny with a video to match, filmed on the Greek Island of Santorini. It’s an impressively effortless track that might lead you to believe the pair have known each other for ages, but the two halves of MaWayy- Masoud Fuladi, or Caspian Beat, who’s one of the most successful electronic musicians in his home of Iran; and Brian Wayy, a Los Angeles native that’s composed music for hundreds of shows and remixed an extensive catalogue of pop songs- have yet to meet in person.

The Winter Sounds call Nashville their home, but their latest video for “Heartbeats” was filmed in Estonia. It’s part synthesizer-fueled, dance-floor banger, and part quirky indie pop. The video sees lead singer Patrick Keenan surrounded by breathtaking views of nature, but it also feels a little exotic- a perfect match to the song itself.

Many know Janet Gardner as the frontwoman of Vixen, and after an extended hiatus, she’s back with her first solo album. “Rat Hole” is ferocious, a romp through classic 80s rock and 90s style, that reflects Gardner’s own musical journey over the years. When she’s not rocking out full-stop with her band mates, we see her sitting on a black leather throne amidst a cloud of smoke. “Rat Hole” has a decidedly old school vibe, but the energy is like nothing we’ve ever seen.

We’ve got a sweet spot for all our fellow Garden State residents, and luckily for us there’s no shortage of musical talent coming out of the area. Back in 2015, we brought you Jace The Great’s politically charged clip for “Black Lives Matter”, which depicted political upheaval and race riots in his native Newark. With “Celebration”, Jace The Great is shining a light on the positive side of the city that everyone from Queen Latifah to Whitney Houston have called home. It’s a feel good video that also features fellow New Jersey native and winner of Bravo TV’s Platinum Hit Sonyae Elise on an absolutely delightful harmony.

The one and only “R&B King of Shreveport, Louisiana” Mista Roe is back with another stellar clip. “Break You Off”- the third video we’ve promoted for Mista Roe- is a lovely track with an unwavering rhythm. The video shows a classic love story, as we see him- charming as ever- on the beach with his boo. This won’t be the last you’ll see of Mista Roe- this fall, he’ll be appearing on a new AMC television series called Fifth Ward.

Sarah Ragsdale is another New Jersey resident, although she’s originally from Maryland. Her latest clip, for “This Kiss”, was filmed in the city of Baltimore. It embodies the spirit of her upcoming album Whimsical Romance and her “Piano Woman” style that mixes pop, jazz, and folk influences. The video sees her romping around Baltimore with an old-timey and playful video that music fans of all ages are sure to love.

Our final video this week comes from Matt LeGrand, a young heartthrob from Chicago via France who’s already amassed a crowd of fans who’ve dubbed themselves “The LeGrand Girls.” Two years after the release of his debut single “Spring Break Girl”, he’s back with “All Good”, a track that he tells The New Nine is “about being OK with yourself.” Filmed in Miami, the video shows Matt working on his own happiness and dancing on the beach following a breakup, embracing the mentality that self-love always comes first.