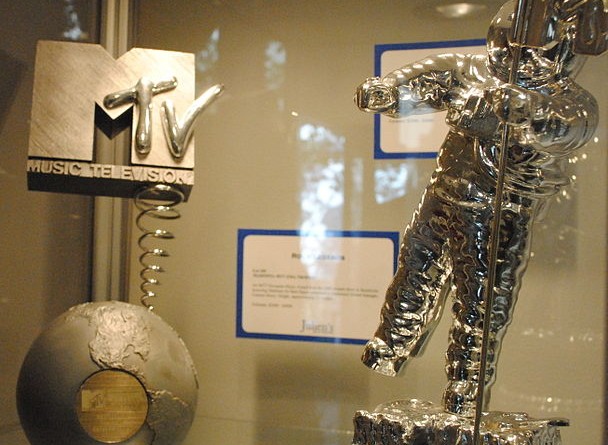 As dedicated promoters of music videos, all of us here at HIP Video Promo are thrilled to see current and former clients receive the recognition we know they deserve. Since their inception in 1984, MTV’s annual Video Music Awards have celebrated some of the best and most exciting music videos from artists of all genres and backgrounds. The 2017 VMAs are just a few days away and it’s got us feeling all sorts of nostalgia and pride as we look back on clients that have won the iconic “Moon Person” (formerly “Moonman”) awards over the past seventeen years.

We worked with Moby for four videos from 2009 to 2010 (“Shot In The Back Of The Head”, “Mistake”, “One Time We Lived”, and “Wait For Me”), but years before that he’d already received two VMAs. In 2001, his video for “South Side” (featuring Gwen Stefani” won the Best Male Video award, and in 2002, “We Are All Made of Stars” won Best Cinematography in a Video (Director of Photography: Brad Rushing).

Many artists go on to leave a mark with their music, but few have left a true lasting legacy. Johnny Cash is one of those legendary artists, and we had the honor of promoting the video for “Hurt” back in 2003. That year, it won the Best Cinematography in a Video award (Director of Photography: Jean-Yves Escoffier). While “Hurt” lost the Best Male Video award to Justin Timberlake’s “Cry Me a River”, it would end up winning the 2004 Grammy Award for Best Short Form Music Video.

As promoters of videos by countless independent artists from across the globe, we’ve always got our eye on the “Best New Artist” winners. In 2004 Maroon 5 won the award for their video for “This Love”, and three years later we worked with them to promote the videos for “Makes Me Wonder” and “Wake Up Call.”

When we teamed with Australian rock outfit Jet in 2003 to promote the “Are You Gonna Be My Girl” music video, the group were an unknown to stateside audiences. But safe to say, Americans embraced their sound with open arms, and in 2004, the clip won the VMA for Best Rock Video.

When Thirty Seconds to Mars released their debut self-titled album in 2002, the world knew Jared Leto as an actor. It’s no surprise, then, that viewers are continuously enthralled with his performance in the group’s music videos. We promoted their debut visual for “Capricorn (A Brand New Name)” in 2002, and they’ve since won three VMAs: the 2006 MTV2 Award for “The Kill”, the 2010 Best Rock Video award for “Kings and Queens”, and the 2013 Best Rock Video award for “Up in the Air.”

Here at HIP Video Promo, we pride ourselves on being on the ground floor with artists before they break through to the mainstream. In 2005 we worked with alternative / hip-hop group Gym Class Heroes to promote their clip for “Papercuts” from their sophomore album The Papercut Chronicles. “Cupid’s Chokehold” was originally included on this album, but a new version was included on the group’s 2006 follow-up As Cruel as School Children. This new version was accompanied by a new music video, and in 2007 Gym Class Heroes won the VMA for Best New Artist.

You’d be hard-pressed to find an alternative / indie rock fan that doesn’t hold at least one Death Cab for Cutie song close to their heart. We’ve worked with the group to promote four separate clips- “The New Year”, “The Sound of Settling”, “Title & Registration”, and “Soul Meets Body”- and we also worked with frontman Ben Gibbard’s other band The Postal Service for “We Will Become Silhouettes.” In 2008, Death Cab’s video for “I Will Possess Your Heart” won the Best Editing award for the work done by editors Aaron Stewart-Ahn and Jeff Buchanan

Sia’s music videos have undergone tremendous evolution over the years. In 2007 we promoted the “Pictures” clip which showed off her quirky sense of humor, but more recent videos have featured a stark look with young dancer Maddie Ziegler performing powerful choreography by Ryan Heffington. In 2014 the video for “Chandelier” won the award for Best Choreography, and Sia’s latest clip for “The Greatest” is nominated for the award this year (read more about that here).