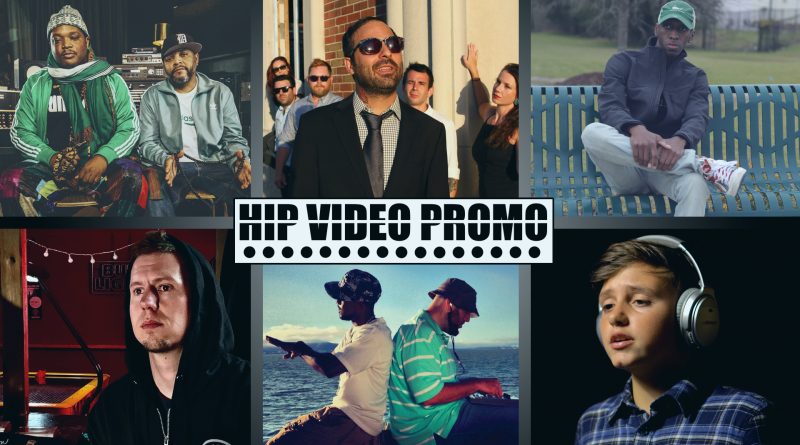 Now more than ever, it’s important for musicians to be creative in how they showcase their artistry and tell their stories in music videos. Our newest HIP Picks – Weekly Client Roundup is here- take a look at the videos above, and learn more about the clips by clicking on the links below.

Shaheed and DJ Supreme have made themselves cornerstones of the Birmingham, Alabama hip-hop scene. They’ve supported Jurassic 5 on multiple tours, and on “Appreciate Life” (from The Art Of Throwing Darts) they’re joined by Jurassic 5 and Ozomatli founding member Chali 2na. It’s paired with a video directed by Jordan Sullivan that shows the artists’ chemistry with each other, making the most of their screen time and radiating mutual respect.

Salt Lake City  mainstay Andrew W. Boss has kept the rap-metal fire alive by laser-focusing on everything that helped the genre conquer the world in the 90s. “Patience”, released ahead of the August 14 release of The Arrival, is here to pound your pandemic blues into submission. The “Patience” video, which Boss directed himself, premiered on Alternative Press and on screen here, he replicates the positive energy of the band’s live shows with the current catatonic state of live music in America.

Formed by Brandon Phillips and brothers Adam and Zach, Brandon Phillips and The Condition carry on the noble tradition of Elvis Costello & The Attractions, The Supremes, Martha & The Vandellas, and do them all very proud. “Sunrise” is the new single off the album of the same name, and the latest in the band’s monthly Summer Singles Series. Directors Todd Norris and Mitch Brian didn’t just make a video, they made a damn movie, giving the track a black-and-white, late Sixties period piece treatment.

With four albums, a slew of singles, some heavy radio rotation, and some high-profile collabs, the time is right for Proper Einstein to drop his latest creation. “Like This” samples Paul Anka’s classic “Put Your Head On My Shoulder”, with a modern R&B/soul flair. It’s the first single from an EP that Proper Einstein is calling YouTube Project, and its video – shot in soft-focus black and white and directed by Proper Einstein himself – feels like the monochrome Golden Age of Hollywood come to life.

After the killing of George Floyd (and so many others), Bay Area rapper Tyson Amir isn’t worried about inclusion in anybody’s Top Five – but with “BLVK Mirror” he might make it on those lists anyway. Tyson’s books Black Boy Poems and the Black Boy Poems Curriculum are interventions in American history designed to address subjects too often overlooked – and do it in the language of hip-hop. Together with the production of Fanatik onBEATS – known collectively as Tyson onBEATS – he name-checks American freedom-fighters and African heads of state, teachers, poets, and visionaries. Fanatik onBEATS is also the videographer for the “BLVK Mirror”, capturing the new Covid-19 reality in the streets of Oakland, CA.

Tamas Bulla is the son of proud Hungarian immigrants who have worked hard to help their kids succeed; starting as guitar lessons at the local Guitar Center, he’s now releasing music videos in the shadow of New York City. In his debut video “Out of Time”, he attests to the new challenges that arise as the clock ticks towards adolescence and young adulthood. Shot at Liberty State Park in northern New Jersey, Bulla stares out at the NYC skyline from the waterfront, knowing that one day, he’ll make it there.