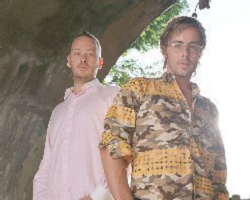 Chances are if you’ve been anywhere near a dance floor in the last few decades, you’ve heard of Basement Jaxx. Felix Buxton & Simon Ratcliffe began as underground producers and party promoters in 1995, they first put their sound on vinyl and held warehouse-style raves in abandoned pizza joints. They debuted the sound of London, SW9, to the world in over 3 million album sales. Basement Jaxx are double BRIT award winners (Best Dance Act), received a Grammy for their third album Kish Kash, and continue to release music under their own label, Atlantic Jaxx Records.

They met at a Thames riverboat party and agreed on the name Basement Jaxx because Ratcliffe had a studio in his basement and the music jacked. Their initial goals were simple: to put on great parties and produce records, which mirrored their heroes on the U.S. house scene. Although they’re progressive house acts, they merged several styles (R&B, U.K. garage, ragga, Latin jazz, ambient techno) with an unparalleled restlessness.

It’s been almost two decades since we promoted “Where’s Your Head At” in 2001. The music video is exciting but also unsettling. A music industry hotshot seems to waste his time at a science lab that claims to have the latest invention in music; humanized monkeys are metamorphosizing into novelty entertainment but end up turning into terrifying predators. The monkeys decide to attack rather than perform, and as the mogul runs away, he finds out that the scientists planned to turn him into the next primate.

Touring is Basement Jaxx’s main focus: they can be found at the hottest clubs throughout Europe and Ibiza. The 2014 clip for “Never Say Never” ft. ETML hopes to make the world start dancing again. Jaxx industries invented and perfected a Bluetooth-enabled, iTunes sync-able TW3RK-BOT, complete with self-lubricating, machine-washable Jaxx Buttocks. The TW3RK-BOT is a sellout, so we think – until we find it escaping the shipment boxes in the middle of the night.