How to promote your music video 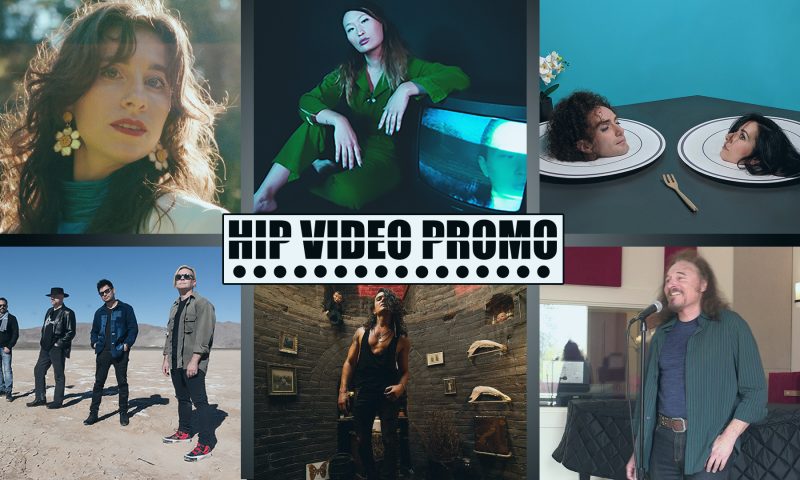 Sometimes we’re blessed with so many exciting new videos, we need two days to share them with you. This week is one of those times with a total eleven new music videos to share! The latest HIP Picks – Weekly Client Roundup is here; take a look at the videos, and learn more about the clips by reading below.

Burbank, Calif. singer-songwriter Wren Wilder is building off the success of her First Flight EP with the new single and music video “Egyptian Cotton.” “Egyptian Cotton” was mixed by Wren herself, and shares a story we can all relate to: finding your lunch table on the first day of school, and the right people to spend your time with. The “Egyptian Cotton” video (directed by Susan O’Brien is a pastel wonderland, with a visual metaphor for the flavor of the track.

A 1990s favorite in the Bay Area underground (they shared stages with Gin Blossoms, The Untouchables, and Juliana Hatfield), The Jenny Thing reunited in 2016 after a hiatus that lasted almost 20 years, this time fully embracing modern technology and a vibrant new sound. Their newest single is “American Canyon”, and it’s full of evocative soundscapes, anthemic choruses, racing-heartbeat rhythms, and poetic lyrics from singer Matt Easton. The “American Canyon” video (directed by Ramesh Nicolas Iyer) is starkly gorgeous, capturing the band in performance but not on a stage.

Adventurous electronic pop singer Nolo Grace is a natural screen performer. Her debut single “Wake Up” features a guest verse by Jamaican-American singer, producer, chart-topper, and consistent hitmaker Sean Kingston. The “Wake Up” music video (directed by Skylar Steinberg) shares a message that sometimes, dreams can be a better guide for our daily lives than hard, unimaginative reality.

Omar Veluz’s drive and adaptability has surpassed that of many of his peers. His remix cover of “Send Me An Angel” peaked at #23 on the Billboard Dance Club Songs Chart, and he’s performed alongside the likes of Alejandra Guzman, Pilar Montenegro, and Olya Poliakova, as well as toured internationally on the China National Dance Tour. The new single “Do You Really Wanna” was created specifically for the horror feature film Scare Us. The “Do You Really Wanna” music video (directed by Ivan Mendez) is, as expected, hair-raising and nerve-wracking – just like the song.

Bruce Guynn is an award-winning songwriter, with three Number Ones and seven Top Thirty songs (both in the US and internationally); his musical resume has brought him to six continents and shows with Chet McCracken (former drummer of the Doobie Brothers), and he’s known as one of the pioneers of the Redwood Coast Sound. He was previously on Ray Ruff’s label and formed his own label, New Coast Records, in 2010. His latest music video is “Time Will Tell” (directed by Stu Wilson), and at its core, it’s more of a peace offering than a video. Singer and rapper SprngBrk (who formerly performed as A1 Bentley) has recorded with T-Pain, written for Trey Songz and Ty Dolla $ign, and made his presence felt on the screen through his appearances on Love And Hip-Hop. Oh, and his upcoming project will feature Jeremih, Mario, Future, and many others. “Pride” is just about the best of his songs, and the video (directed by SprngBrk and Sean Alexander) shows just how easily pride itself can get in the way of resolving disagreements and connecting with someone.

From a Thai refugee camp to his current hometown of San Diego, STAR 2 shows no signs of slowing down. He’s followed the recent “Give Me Your Heart” (ft. YSN Flow) with “Tell Me Thatchu”, a track just soaked in good vibes, amazing beats, and smooth vocals. Directed by Dusan K, the “Tell Me Thatchu” video is an animated clip that’s so well-done, you might think it’s real life.

Spider Rockets is headquartered in Hazlet, NJ, a classic Jersey highway town minutes from the water, and they epitomize the regional attitude. They’ve toured with Saliva, Trapt, Puddle of Mudd, Saving Abel, and more. “Rip Your Heart Out” comes from their fifth album Along Came A Spider, which was produced by Dan Malsch (Tantric, Doro). The “Rip Your Heart Out” music video (directed by Roman Fernandez) takes place largely at a seaside amusement park – but the coasters here aren’t the only ups and downs you’ll see.

Amanda Holley has picked up some prominent fans recently, including Grammy winner Brian Stanley, The Gorillaz, Tempations songwriter Jimmy George, and Cuba Gooding. Holley has the title track on Showtime’s film Sharon 123, and herself is currently starring on a reality show under executive producer Larry Namer (founder of E! Entertainment) and Randall Emmettt (The Irishman & Vanderpump Rules), centered around E! Hollywood’s Acting Coach to the stars, Bobbie Chance. Her new single “Runaway” was written by Cecily Wagner and Amanda herself, and produced by Davis Chris and Shane Foster (Yo Gotti). The “Runaway” video (directed by Louie Gooey, Eve Rafael, Amanda Holley) features an appearance from celebrity stylist and designer Paris LV Landon, but the focus is on Amanda.

Since restrictions have eased, Connecticut singer-songwriter has been playing all around the state at outdoor venues, beer halls, backyards, wherever will have him. Following 2020’s “Just Want To Talk” is the new single and video “Like a Fire.” The “Like a Fire” music video (directed by Greg “Lil Goop” Potter) captures Jack Ryan by himself, making the most of a lovely evening by a lake.