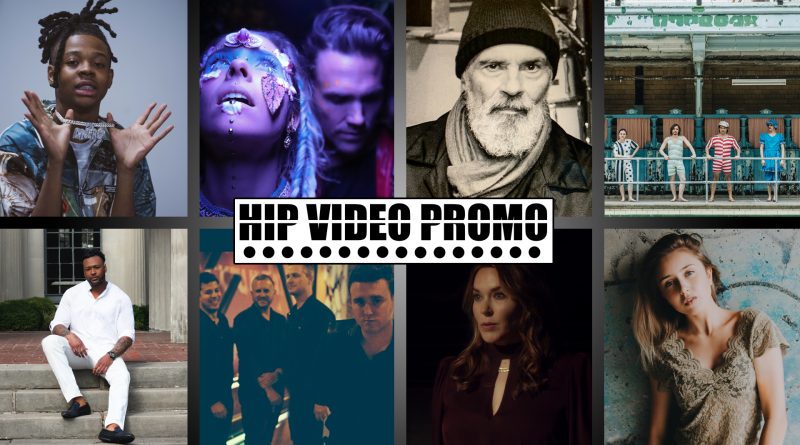 Whether it’s rap, synth-pop, or folk, music of any genre can tell a story and provide an entertaining and exciting video. But what’s the sign of a great video? It’s one that you want to watch again and again and again. Our newest HIP Picks – Weekly Client Roundup is here- take a look at the videos above, and learn more about the clips by clicking on the links below.

Slip-N-Slide Records artist F$O Dinero has been on a roll, and “Talk To Me” – the latest single from his debut album Color Money – is a demonstration of his flexibility and a sign of surprises to come. In Chris “GT” Ferguson’s sentimental video, he greets his girl with a bouquet and brings her to a pink-lit bedroom. It’s nostalgic and feels familiar, but this is a new sound and new side of F$O Dinero.

Having shared the stage with acts like Walk The Moon, Third Eye Blind, and PVRIS, Heartracer makes razor-sharp synth-pop gold. Their new single “Darling” was engineered at Fidelitorium Recording Studio in Kernersville, NC by Ted Comerford (Jukebox the Ghost) and mixed in Los Angeles by Paul David Hager (Katy Perry, Beck).  Ted Comerford has directed the video, which shows the band tearing into the track inside a neon haze.

Bruce Sudano has been a major player behind 20th century hits by Michael and Jermaine Jackson, Dolly Parton, and Donna Summer, his late wife.  He runs the indie important Purple Heart Recording and has now released Spirals Vol. 1…Not A Straight Line To Be Found on the label. “The Mountain”, which was produced by Steve Addabbo (Bob Dylan, Jeff Buckley, Suzanne Vega) and mastered by Greg Calbi (Talking Heads, David Bowie, The Arcade Fire), has a compelling music energy and a fairly serious message, and is paired with a cut-and-paste animation video that brings welcome levity to the song.

At the intersection of folk and prog is multinational quartet Frogbelly and Symphony, whose members each have an impressive resume (guitarist Benjamin Trott was a member of the rebooted version of The Albion Band; singer Liz Hanley is also a singer and fiddler for The Green Fields Of America, Mick Moloney’s long-running exploration of Irish music, storytelling and folklore in America; drummer, writer, singer, and producer Ray Rizzo is a legendary NYC rocker who has worked with Josh Ritter, Bob Weir, and Julia Stone). “Benjamin Went Fishing” is the first release from the upcoming album Canis Major (produced by band leader, bassist, and singer Thomas Lebioda). Juha Hansen’s clip puts focus on Hanley, but gives plenty of screen time to the other members of the band, who are dressed in period costumes and romping around the British countryside.

Husband and wife duo Elephant Heart (Jason and Victoria Evigan) don’t just make world music; they’re true world citizens. They formed this collective in 2016 but Jason had already had an impressive career in production, working with Madonna, Maroon 5, Demi Lovato, and more. “Love Is The Weapon” is the type of positivity our world needs, from a group who gives back (they’ve founded the international non-profit Picture This). Directed by Pat Ridge, the video sees them performing alongside the local citizens they now call friends in the Paal Road in the Indian City of Jodhpur.

“All That I Am” Music Video: Sunny Ozell (Pop/blues)

Overnight Lows is New York pop-soul singer Sunny Ozell’s second album and the first dedicated to her original songs. Video director Alissa Torvinen (who’s shot clips for P!nk, the Black Eyed Peas, Lindsey Sterling, and more) understands the intensity of “All That I Am”, and appropriately amplifies it in the video. Here, Sunny is alone at night in the desert, when a speeding horse races in, seemingly out of nowhere.

Maplewood, NJ native Trav Torch has the R&B genre in a chokehold, and the #RnBSuperhero is now gearing up to release Bachelor Life 2, the follow-up to last year’s debut Bachelor Life on his album Cologne & Cognac Entertainment. “Lust” is the first visual from the new record, and as always with Trav Torch, we know exactly what’s on his mind. But one thing’s different this time: instead of on film, he appears as an animated version of himself in ScaryboyGFX’s clip, where three women surround him, following his every move.

At just 17, Kellie-Anne has amassed over 140k streams on Spotify and a top 5 chart placement on Reverbnation, as well as turning heads on The Voice Kids in Canada and now at international music festivals and legendary NYC clubs like The Bitter End. “Legacy”, an epic piano ballad, is her strongest offering yet, honoring the story of her close family friend John who lives with ALS (Lou Gehrig’s Disease), and how he’s left a lasting mark on her life. She directed the video herself and alongside producer Rob Fitzgerald, they’ve shown her friends and relatives as a family at home, navigating the hurdles that ALS throws their way.