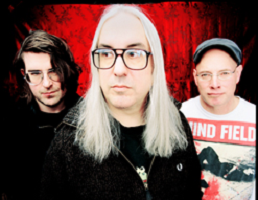 Everyone remembers the 1990s as the golden age for the independent scene, but some of the most revered alternative acts to be recognized got their start in the 80s. In the age of new wave and hardcore punk, some bands strove to create a sound that fit a sort of middle ground and worked to influence some of the 90’s bands that we have grown to love. One of those particular bands is none other than Dinosaur Jr., a group that many people saw as a precursor to the sounds that we’d get from acts such as Nirvana or Pearl Jam.

Formed in the college town of Amherst, Massachusetts, Dinosaur Jr. started from a proposition made to lead singer J Mascis from Homestead Records founder Gerard Cosloy. The deal was that if Mascis could get a record together, Cosloy would release it and put whatever band he had on the label. Wanting to take up the offer as soon as he could, Mascis churned out a couple of songs and passed them over to his friend Lou Barlow to see if they were any good. Shortly after gaining Barlow’s approval, a band named Mogo was formed but quickly disbanded after a member used their first show to go on an anti-police rant. Excluding that one member, Masic and Barlow would go on to form Dinosaur and play a sort of rock music that had a jangly twang to it and fit well with Mascis’ Neil Young reminiscent vocals. After a lawsuit forced them to add the word “junior” onto their band name, Dinosaur Jr. was finally formed and ready to take on the independent scene.

“Over It” is a video release that pays homage to Dinosaur Jr.’s punk rock skater roots. All three members are shown on a sunny day riding skateboards and BMXs through a city, channeling a sort of youthful exuberance as they do it. Riding through, they take it upon themselves to perform stunts and tricks to impress video viewers and fans alike. At times they fail to perform whatever stunt they attempt to pull off, but they pick themselves up and get right back to advancing skater culture in the independent scene. The simplicity of this skating demonstration is what gives it a clear edge above other music videos. There is no ominous lesson that the audience needs to pick up or understand. All they have to do is sit back and enjoy the quality skating that is being done right in front of them. This is a skating video that is made for the sake of skating.

After an eight-year breakup that ended in 2005, Dinosaur Jr. returned to the indie scene intending to stir things up and make even more astounding music. In 2007, they released Beyond, their first album after ten years, and an attempt that was lauded by publications such as Paste Magazine and Pitchfork. Since then, they have churned out three more albums, with all achieving some resonance with fans and critics alike. We can’t wait to see what else Dinosaur Jr. has in store for the future and are eagerly awaiting any release they might be planning.