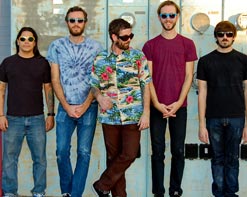 “Temple Grandin” is a relentless and frenetic blast of acoustic punk that recalls the sound of Neutral Milk Hotel while allowing Bonnette’s distinct sense of melody and wordplay to shine. “Open up your murder eyes and see the ugly world that spat you out,” he sings happily before the band bursts into gear. In the song, he namechecks Stevie Wonder, Helen Keller, and, of course, Temple Grandin herself, who famously brought about “humane” change to American slaughterhouses, hence, Bonnette’s maniacally repeated refrain, “Find a nicer way to kill it.” Check out their full artist page here.