Do Not Forsake Me Oh My Darling premiere video on Magnet Magazine tonight!

HIP Video is proud to present yet another Farrad Video! 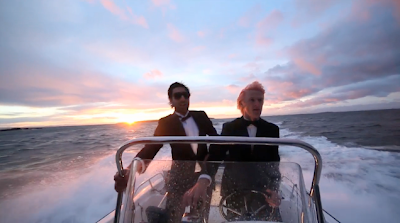 Remember those endless nights of the summer after you graduated high school or college, where everyone simultaneously made up their mind to do all the crazy wrong things they aren’t supposed to, all at one time? It’s okay, we know it’s common knowledge that this period of our lives will only be preserved as a mystery of foggy memories revisited through pictures of events no one remembers happening. Here is where Bikini have accomplished the absolutely impossible: they have created an Event Horizon-style montage of all the highlights for your ingestion. “ACheerlaeder” is a fast paced frolic on the fringe of self-destruction, skipping from frame to frame, from one untamed scenario to another, placing us in the middle of all the action. There are numerous scenes of decadent dissolution including pill induced laser raves, skinny dipping, beach house parties, firework balls launched out of a borrowed convertible, midnight skateboarding, high speed boat rides, and much much more (including a Hindu deity splashed in champagne)! Okay, let’s be honest here, most of us did not have gorgeous Chanel models wrestling each other’s clothes off as part of that experience as so adoringly included here, but who says we can’t pretend. One of the video’s stars and co-directors is MTV’s own handsome heartthrob Jonnie Penn from The Buried Life, a show about four friends attempting to complete a list of “100 things to do before you die.”
Bikini’s Nigel Diamond and Olivier Olivier, appear spliced throughout this top speed clip. The band prefers the use of numerous analog pedals and digital synthesizers alongside tried and true guitar and combo amps to forge their distinct sound. The sonic attack on this track is as distant and desolate as it is crisp and in your face, featuring a thumping 808 retro kick, washed out chords and blips, and some truly dancy synth melodies. Radiating with cool out of every pore, both visually and in audio form, Bikini are set to be one of the most talked about groups this sunny season.

And check out their Myspace page here.