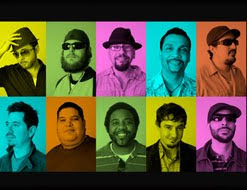 The finest, funkiest, and most creative Latin orchestra to come out of the United States in the last decade, the Grammy nominated Grupo Fantasma is back with a video for “Montañozo” that is so vivid, it will make the rest of your day seem pale in comparison.

“Montañozo” is the first single off the group’s fifth record El Existential, which has already received much applaud form musicians and critics alike. “Grupo Fantasma is as tight as one would expect from a band that routinely backs up Prince” exclaims LA Weekly and The Washington Post affirms that “the ten members represent a new generation of latin music.” Their last effort, the Grammy nominated Sonidos Gold (2008), has trademarked the ensemble’s innovative sound and scored a cover feature in Pollstar Magazine, radio spots on NPR’s “Day to Day” and PRI’s “The World”, top ten status for several months on the CMJ radio charts and extensive press coverage throughout North America and Europe.

Check out the “Montañozo” video below!