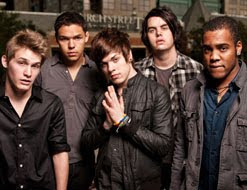 The cleverly-titled “@Reply” at once serves as a biting response to their trolling detractors and a brave statement of purpose and identity. Set to a crashing, adrenaline-fueled soundtrack of dynamic rhythms, bone-crushing breakdowns, and winning melodies you just can’t shake, the boys in the band are calling their new sound “orchestral pop.” You’ll likely just call it “awesome.”

Frontman Cody Carson first made a buzz on the internet playing acoustic covers of one of his favorite contemporary bands, All Time Low. After forming Set It Off and self-releasing their second EP – 2009’s Calm Before the Storm – the response was mixed. To their great credit, they toured hard and made many, many fans on the road with their powerful live show. (Currently, 28K fans on MySpace and growing!) But haters on punk websites and blogs relentlessly slagged Set it Off for being derivative and unoriginal. Carson and the rest of Set it Off took these stinging comments to heart and eventually went back to the drawing board. Now they are back with a vengeance. From the first measures of “@Reply,” you know you’re in for something different. Orchestral strings pluck and bells chime with growing tension over atribal-esque drum beat before Carson brings it all to a brief hush with a coy “shhhhhh” and then rages back to full-volume with a blood-curdling scream. The next few minutes will bring to mind certain tones of Panic! at the Disco, and Cork Tree-era Fall Out Boy, but Set It Off – with their unique melodic sensibilities and Carson’s powerful pipes – bring it all together in an exciting and original package for maximum impact. FULL BIO HERE.

Check out the video for “@Reply”