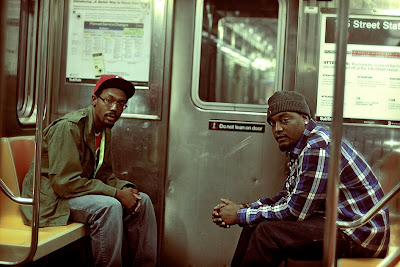 Scripts N’ Screwz hail from the stark and gritty urban cityscape of East St. Louis. They have grown up with the challenges of being from one of the nation’s most dangerous city environments, yet never fell victim of its clichés. Their previous release The New Noise acted as a lyrical tour guide of the city and its inhabitants, but stayed away from the common and boring repetitiveness of gangster rap. Their fresh take on the genre catapulted the duo into CMJ and Top 20 Hip Hop charts across the country, as well as earning them features on MTV and A&E.

The group once again steps up to the plate with “On 10,” which is the lyrical equivalent of “cranking it to 11.” Hanging on to the notion, the duo pulls out all the stops with this beautifully shot video installment. The majority of the video takes place inside a red hallway that is painted to spin like a hypnotic spiral as the camera moves back and forth along its path. This unique painting style creates a spiral motion around our rapping heroes as they take center stage and attack the camera with their rhymes. However, the clip’s coolest effect is that as both Scripts and Screwz trade off verses and lines, they pop out from each other’s chests! Having such an unusual visual style speaks further of the innovative nature of this duo. While their peers take the much easier route of throwing in a few cars, girls, and drinks into a flashy clip, Scripts N’ Screwz never settle for the ordinary. The video also uses several black and white captures of each rapper walking the streets of their home city through a fish-eye lens, giving the clip a gritty side. FULL BIO HERE.
Check out their new video for “On 10”