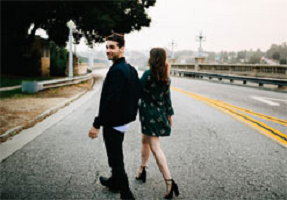 For this week’s Motivation Monday we present to you one of our own Mikey Wax. Coming from Long Island, he started in the basement scene and quickly made his way up the ranks. By the age of eight, he already knew how to play the piano. Ten years later, he attended college at Vanderbilt University in Nashville to craft his talents in songwriting. Without having the foresight to see the direction his education was going to take him in, he decided to come alive off the paper and start his own solo career. He knew he had a talent but a problem arose when he wasn’t sure if his style could make it onto modern day charts. Music was always the center point of his life, but he doubted how he would rein victorious in an industry that was obsessed with dark themes and false gods. The underlying ruthfulness could not be ignored. Instead of writing songs about war and rage he took a different approach by centering his songs around the beauty of life. Mikey’s life wasn’t paved with gold either. He had a close friend battling cancer but used that difficult time to translate it into a positive, which shows his character and also his artistic choices. What makes him stand out is his sturdy pop construction, heartfelt lyrics, crisp production with an emphasis on clarity and communication, and a sweet, approachable vocal delivery. Always gaining his creativity from the light side of things, he had no place on the charts- so he thought. With the world growing colder, people’s tolerance to light production was growing weary but not tired.

Staying true to himself and his message, Mikey Wax released his debut album Change Again in 2009. He didn’t have a huge fanbase but post album release, he had gained a quick internet following. To his surprise, the music video for “In Case I Go Again” was spotted on the front page on Youtube. Launching itself on the digital pop charts, he was able to go on tour with like-minded musicians such as Howie Day, Andy Grammer, and Tony Lucca. Quickly gaining support, he released an EP in the following year, Traveler. His second album release Constant Motion placed on the Billboard Heatseeker chart. In 2014 he released his self-titled album Mikey Wax, which held songs that would continue to change his life. Due to his growing popularity, social media platform, talent and positivity- his music made perfect soundtracks to life, love and everything in the middle without being phony.

Although one might not recognize the name Mikey Wax at first, his songs have been a part of your everyday television viewing experience. His 2014 single “You Lift Me Up” garnered over 8 million Spotify streams and was placed in the Keeping Up With The Kardashians Season 10 Promo Commercial. The “Kardashian Effect” took him to places he had never experienced, as millions of viewers tuned in every week to catch up with the most famous celebrities alive today. It was at that moment where he found himself.

Mikey Wax slowly but surely started to find his place within the industry where he could thrive with his unique cheerful tunes. His music has also been featured on FOX’s So You Think You Can Dance, Caitlin Jenner’s I Am Cait Promo, a United Airlines ad, MTV’s Real World, and several NBA games on FOX Sports and games on NCAA March Madness, and Nike Swim ads, among others. His music has been featured on some of television’s primetime entertainment such as Freeform’s Switched At Birth and Pretty Little Liars. He continues to gain success with his recent single, “Big Little Life”, which has been featured on Spotify’s New Music Friday in eight countries. Making this sweet song even sweeter is the fact that he wrote it about the woman he now calls his wife!

Now, Mikey Wax can be described as, a musician you may have “never heard of who deserves a Grammy”, along with a “piano prodigy” and “social media phenomenon”. The word around town is that he is one of the most promising rock/pop singer-songwriters out right now. His trick is to start humming some kind of melody while writing genuine lyrics he can connect to. It is this personal touch that gives his music a cinematic quality. His music is able to not just connect with music lovers but goes outside itself to create a bigger picture. The personal lyrics paired with slowed down production act as testaments and inspirational quotes that can fit any situation. It is one thing to just make music, but to have your music make an impact on another creative field is something everyone here at HIP is proud of. Mikey Wax had a big heart in a hard city, but this ordinary guy in a V-neck T-shirt, button downs, Levi jeans, and occasionally a backwards Mets hat, took the charts and claimed his name as not only a musician but as an artist. As clear as he is with visuals, his fate wasn’t always transparent. He holds the flag for the ordinary, showing us all that good will always prevail in times of great darkness.