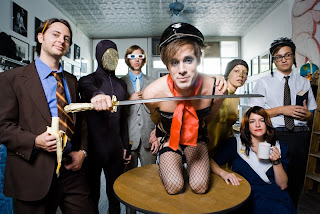 of Montreal covered a song that REM made famous, and the video of their cover popped up on Stereogum last week.
The song is called “Superman,” originally created by freespiriting 1969 band The Clique.
Although of Montreal and REM both covered “Superman,” the artistic differences between the two bands’ performances are striking at first glance.

1.)Kevin Barnes was almost naked, except for a lovely scarlet spandex-thing hugging his pelvis. Meanwhile, Everyone in REM was clothed during the performance.

2.) The rest of the of Montreal band members donned Superman costumes while playing their instruments. They swayed their hips, sporting that red ‘S’ as if it stood for ‘sultry.’
Meanwhile, REM wore normal clothes. To indicate the fact that they were singing about Superman, they’d raise their arms up occasionally.

The video of the band getting their Superman on is below: