of Montreal: Documenting themselves via video

Julien-K gets love from Revolver 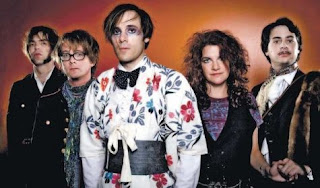 A clip appeared on of Montreal’s Web site yesterday, documenting the crazy theatricality of their shows. This one was at The Pageant in St. Louis. The golden Buddha-things were there, as well as the zany graphics that could possibly give seizures to unsuspecting epileptics in the audience.