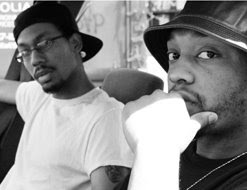 East St. Louis: Home of Joesphine Baker and part of the legend of Duke Ellington. Another place in the USA where urban neighborhoods are rising up, generation after generation, to tell their story. Stories about living in places like this–the sorrow, the heartbreak, and the joy and pleasure. The political discontent.

Scripts ‘n Screws has become part of that legacy. Tough rappers, setting the scene of St. Louis in stark detail, and also criticizing the politics that make it so tough. They are part of the new generation, telling the story of the city.

Watch the video for “Brick” below: