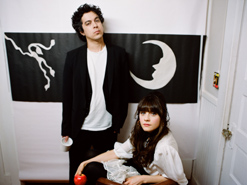 Greetings cherished programmers! It’s Andy Gesner and the staff from HIP Video Promo bringing you this highly anticipated new clip. The life of a movie star may be a fine one, but let’s be honest – there’s nothing like making records and playing shows. It’s a widely-known fact that Hollywood is filled with name actors with a secret and wild wish to rock. Many take up a band as a sideline, and a brave few decide to write their own songs; even then, it’s rare that one of these world-famous performers is sufficiently dedicated to music to write and record a first-rate album. Zooey Deschanel is an exception. Audiences who know and love her for her starring roles in The Hitchhiker’s Guide To The Galaxy, Winter Passing, and Bridge To Terebithia may be surprised to know that Deschanel is an outstanding singer and songwriter as well as a galvanizing screen presence (those who saw her in Elf won’t be shocked at all, since she sang a song on the soundtrack and in one of the film’s most memorable scenes).

Volume One by She & Him is the first full-length set of her songs, and since its spring release, it’s quietly become a major favorite among fans of indie music, modern-day countrypolitan revivalism, and lovely, offbeat pop

She’s had help. The “Him” of the band’s name refers to M. Ward, who Deschanel met on a movie set, and who encouraged the actress to make her songwriting public. Ward and Deschanel first collaborated on a striking version of Richard & Linda Thompson’s fatalistic folk classic “When I Get To The Border” for the soundtrack to The Go-Getter; when their cover gained substantial underground notoriety and praise, the duo decided to make their partnership a permanent one. Credit Ward for the radiant sound and coherence of Volume One: he handled production chores and captured a warm early-Seventies aesthetic that perfectly complements Deschanel’s writing. Rachel Blumberg (The Decemberists), Mike Coykendall (Bright Eyes), and Mike Mogis (production for most of the Saddle Creek roster) make guest appearances, but the focus here is on Zooey Deschanel’s affecting singing and winning songs and M. Ward’s guitar and gorgeous harmonies.

Reviews have been ecstatic so far. Tim Sendra of the All-Music Guide calls Volume One “a magical place where light-’60s pop meets strummy country tunes and candy-coated folk, a mythical meeting place between Sandie Shaw and Tammy Wynette with cameos by Richard & Linda Thompson”. “Deschanel and Ward definitely know their mellow”, crows Rob Sheffield in Rolling Stone, after likening the duo to “a great lost Seventies AM-gold couple”. The clip for “Why Do You Let Me Stay Here” feels like an indie classic, too – a cross between Sesame Street animated whimsy and something far darker. The fetching Deschanel begins singing atop gigantic pastel “WHY”?; it looks like a twisted version the sort of stage set typical of a vintage variety show. Losing her balance, she falls in slo-mo, hits the ground and “dies” in a pool of cartoon blood; before long, her ghost rises, grabs the microphone, and continues the song. From there, things only get weirder and more arresting: the duo shoos away animated birds, a cowboy blows a heart-shaped bullet-hole in Deschanel’s chest as she sings, a gigantic M. Ward crushes a tiny Deschanel beneath his boot heel. Throughout, Zooey Deschanel throws the audience alluring looks and suggestive glances; she knows how to work the camera, commanding rapt attention with every gesture, whipping up audience anticipation for Volume Two.

It is a terrific pleasure for us to have the opportunity to work together once again with Lindsey Kronmiller and the team at Merge Records to bring you this striking new video. They’ve hooked us up with a bunch of copies of Volume One, and the duo will be touring throughout the summer, so let us know if you’d like to get hooked with some giveaways or video interviews! If you need more info, call Andy Gesner at 732-613-1779 or e-mail us at info@HIPVideoPromo.com . You can also visit www.MergeRecords.com or www.SheAndHim.com to find out more about She & Him.