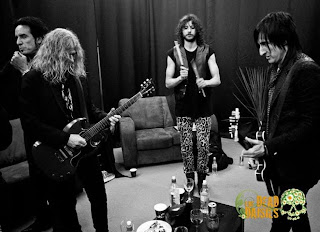 The Dead Daisies are this year’s most notable rock and roll band. Jon Stevens of Noiseworks/INXS, Alex Carapetis of Nine Inch Nails, Richard Fortus and Dizzy Reed from Guns ‘N’ Roses, Marco Mendoza of Thin Lizzy, and David Lowy of Mink/The Angels collectively create an undeniably charming endeavor for viewers, giving music listeners a chance to choose the fate of the protagonists in their new videos.
These notable rock and roll alumni captivate audiences in the first video clip “Lock ‘N Load.” This song in particular has a guest appearance by Slash. However, there just so happen to be two different versions of this clip, and the first video is considered the “Let Him Live” version, and the second one is the “Let Him Die” version; at the end of this video it gives the viewer the choice to either let him live or let him die.
Be sure to visit www.hipvideopromo.com for all of your new info on The Dead Daisies.