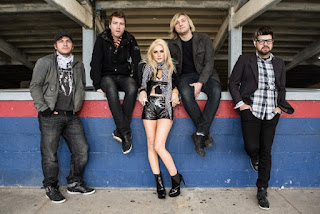 Since 2005, The Vettes have been turning heads and making a concise name for themselves. Throughout their hometown in New Orleans, as well as throughout the U.S., this family band have released a countless number of demo CDs before the official release of 2008’s T.V. EP and 2010’s full-length PLASTICVILLE. They performed at 2011’s Voodoo Fest in Louisiana, sharing the stage with well-known acts such as TV on the Radio, Soundgarden, and Odd Future. 2012’s Voodoo Fest landed them performances with Metallica and Silversun Pickups.
The Vettes have found themselves in a loftier position with their fanbase after the launch of their new website http://the-vettes.squarespace.com/. This interactive site offers fans and curious music listeners a chance to get up close and personal with The Vettes. Photos, upcoming shows, news, and information about the band is featured.
Be sure to check out the site: http://the-vettes.squarespace.com/